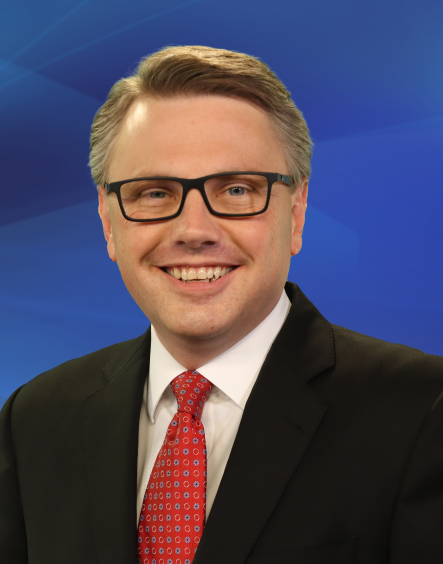 John Dissauer is an award-winning multi-media meteorologist. He is a seasoned forecaster bringing over 22 years’ experience to the Storm Alert Team.

During his career, he has worked various weather events including historic ice storms, blizzards, tornadoes, flooding, and wildfires.

John is a graduate of Ball State University where he studied meteorology and telecommunications. At Ball State, he was one of the founding members of the Ball State Storm Chase Team. He was also actively involved with the on-campus student television station.

He is a member of the National Weather Association and was awarded the NWA Seal of Approval in 2003.

John enjoys storm chasing when the opportunity arises. He has spent many weeks chasing storms across the Great Plains with the Ball State University Storm Chase Team. To date, John has spent 34 days and 18,500+ miles chasing storms through the Plains and the Midwest.

In 2005, he worked as a consultant for the documentary “Tornado Alley: Bach Home Again in Indiana” produced by Ball State University. The documentary was seen on PBS television stations around the country and is also used for emergency management training.

He has won several awards over the years for his work in television including an Emmy-award for a half-hour weather special.

When not forecasting you can often find John working with some type of technology. While working as a meteorologist at KFVS-TV he also served as the Director of Internet Development where he oversaw the design and implementation of new technologies on the station’s website, mobile applications, and internet integration in the newsroom. In 2004, John designed and produced the first podcast for a television station and/or news organization on the internet.

John has a wide range of interests including travel (he has been to 44 states and 12 countries), sports (big Indianapolis Colts, Pacers, and Indiana University basketball fan), and aviation where he hopes to obtain his pilot’s license.

You can watch forecasts from Chief Meteorologist John Dissauer, on Channel 8 Eyewitness News at 5pm, 6pm, and 10pm Monday through Friday.

Back to the 90’s and winds increase

Pattern change underway; near daily chance of rain through start of weekend

Cooler temperatures on the way to southeast Nebraska

Warm and humid weekend, including the warmest Father’s Day in 34 years

Heat, heat and some more heat

Warming into the weekend; heat wave ahead

Storms possible in the evenings this weekend

Warming for the last day of the work week

Cloudy and cooler with chance for showers Wednesday

Warm and humid holiday weekend with chance for storms

Temperature and humidity increase for the holiday weekend

Rain on the way; Will continue through midweek

Warm start to the weekend followed by Sunday rain

Storms to bring a cold front to Nebraska Thursday night

Cooler Tuesday before heat and humidity return for Wednesday

Warming up to the 90s to start the workweek

Rain to be replaced by sunshine and summer heat

Rain returns to Lincoln for midweek

Wet week ahead for southeast Nebraska