Lincoln – The Husker basketball team will make at least 26 national television appearances during the 2019-20 season, as the Big Ten Conference announced its television schedule and start times on Thursday.

The Huskers will make three appearances on the ESPN family of networks, including Big Ten home games against Michigan (Jan. 28, 6 p.m.) and Ohio State (Feb. 27, 8 p.m.). The other appearance is the Big Ten/ACC Challenge game at Georgia Tech (Dec. 4), with that start time and network determined at a later date.

The Huskers will make 19 appearances on BTN, including the season opener against UC Riverside (Nov. 5, 8 p.m.) and Big Ten opener at Indiana (Dec. 13, 7 p.m.). The robust BTN schedule includes two other non-conference games, as well as 15 Big Ten regular-season matchups. For the second straight season, the first three days of the Big Ten Tournament in Indianapolis will be exclusively on BTN with the semifinals and finals carried nationally on CBS.

In addition to the 26 national television appearances, Nebraska will have four games available online BTN+, including the exhibition game against Doane (Oct. 30, 7 p.m.) and non-conference games against Southern Utah (Nov. 9, 1 p.m.), Southern (Nov. 22, 7 p.m.) and North Dakota (Dec. 21, p.m,). Broadcast information for the Huskers’ games in the Cayman Islands Classic will be announced at a later date.

All of Nebraska’s 2019-20 games will be available across the state on the Leafield IMG Husker Sports Network and available online on the Huskers’ app, and on TuneIn Radio and the TuneIn app.

Fans can get their first look at the 2019-20 Huskers under first-year coach Fred Hoiberg at the Opening Night with Husker Hoops on Friday, Sept. 27. As of Tuesday, around 1,500 tickets remain for the event which will include a 20-minute scrimmage, introductions of the Husker men’s and women’s teams and a special performance by hip-hop superstar Rick Ross. 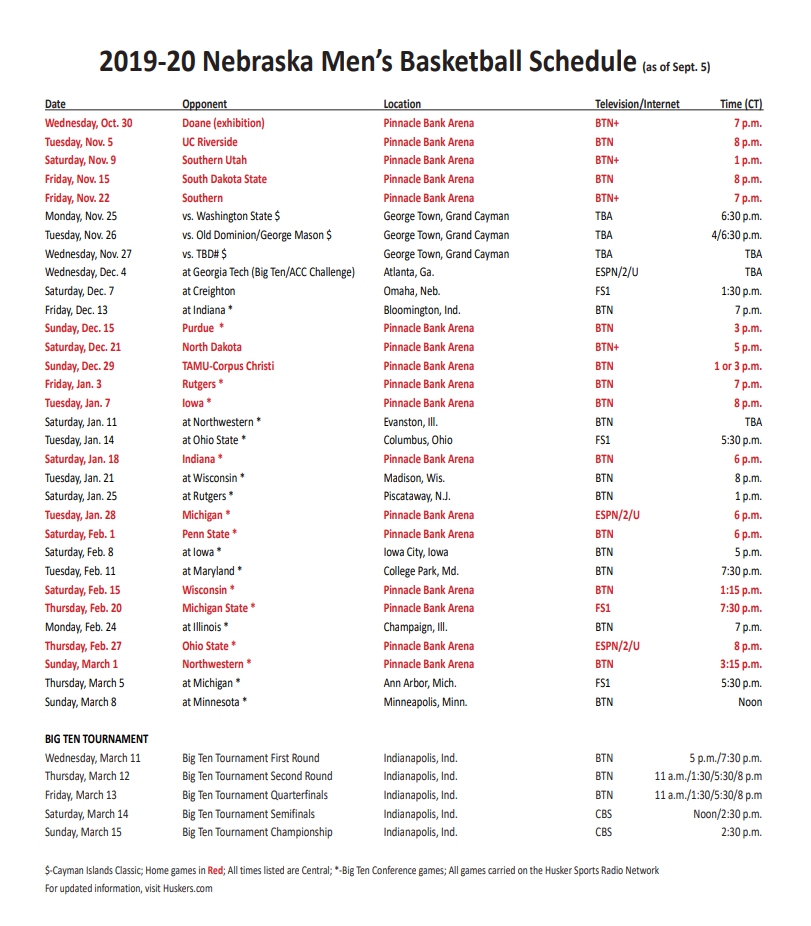