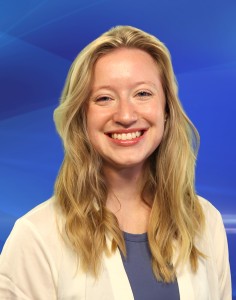 McKenzie “Z” Johnson started working at Channel 8 as an intern in January of 2022 before being hired as a full-time Multimedia Journalist in August.

She is graduating early from UNL in December of 2022 with her degree in broadcast news. She is called “Z” around the station because there is a producer who is named Mackenzie.

McKenzie grew up in Hebron, Nebraska, with her parents and four younger siblings.

She loves being able to stay close to home so she can still go back to support them. She loves to watch them compete in sports and see them grow up.

She became interested in television news by watching “Dateline” and “20/20” with her mom. Doing investigative journalism for a similar show is still her absolute dream job.

Z job shadowed at KLKN as a senior in high school, which is how she knew she wanted to pursue a career in the field.

When she’s not working or going to classes, she loves to have girls’ nights with friends, read books and listen to music in the car. If you want to reach out for a story idea or say hi, you can find her on Instagram, Facebook, and Twitter.

One dead after Lincoln crash

24 early childhood educators in Nebraska will win $1,000 each

UNL student says she was almost run over by administrator

Experts say monkeypox is nothing to worry about in Nebraska

‘What Were You Wearing?’ exhibit at UNL ‘opens people’s minds’ on sexual assault

Record number of firearms found in luggage by TSA in 2021

Nebraska schools could be required to teach about the Holocaust

$15 million given to Lincoln-area nonprofits

Nebraska vaccine exemption bill moving to final round of debate

‘American Pickers’ is coming to Nebraska, and they’re looking for a collection to feature