A large storm complex bubbled up along the edge of a cold front Friday night resulting in several severe thunderstorm and tornado warnings. The complex started around 4 p.m. and continued to hold its strength in Nebraska until 7:30 p.m. before moving to the Kansas side.

Storm reports of hail the size of baseballs came pouring in and pictures of funnel clouds filled up our social media pages. Here are a few official storm reports from the National Weather Service after the event ended:

The largest of hail that fell from this complex actually was on the Kansas side in Mankato, KS where grapefruit sized hail was reported. To further understand just how big some of these hailstones were, here is a graphic from the National Weather Service that shows hail size in inches. 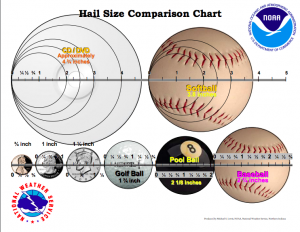 Damage reports from the tornadoes will be evaluated in the next few days to rate the strength using the Enhanced Fujita scale. As of now, the only reports of damage are from large hail and high wind gusts.