In the first week of April, the nonprofit took in 190 animals, more animals than the entire month of March combined.

LINCOLN, Neb. (KLKN) – It’s been a busy start to the month for Nebraska Wildlife Rehab.

In the first week of April, the nonprofit took in 190 animals, more animals than the entire month of March combined.

“It was this like kind of delay in March, and then all of a sudden, a boom when people went outside when the weather got nice and that’s what drove our intake numbers up really fast,” executive director Laura Stastny said.

Nebraska Wildlife Rehab is a wildlife rehabilitation organization that serves the entire state of Nebraska and is dedicated to rescuing, rehabilitating and returning wild animals to their natural habitats.

Animals at the Omaha-based rehab center are there because they were found harmed or injured in the wild. Stastny says more than 90% of the wildlife the organization receives are hurt as a result of intentional or unintentional human action. Examples include being hit by a car, being shot or being kidnapped.

Stastny says Nebraska Wildlife Rehab receives about 7000 animals a year from across the state. The recent mass influx of baby animals can put a strain on the resources the organization has when it comes to taking care of each animal.

“When we have that many animals, what we are focused on is making sure that every animal gets the care it needs,” Stastny said.

Examples of specific needs for the animals include things like heating pads, baby bottles with specialized nipples, formula, incubators, and dishes. After the recent baby animal boom, the organization took to Facebook, posted an “Urgent Needs” wish list, and asked the community to contribute in any way they can. 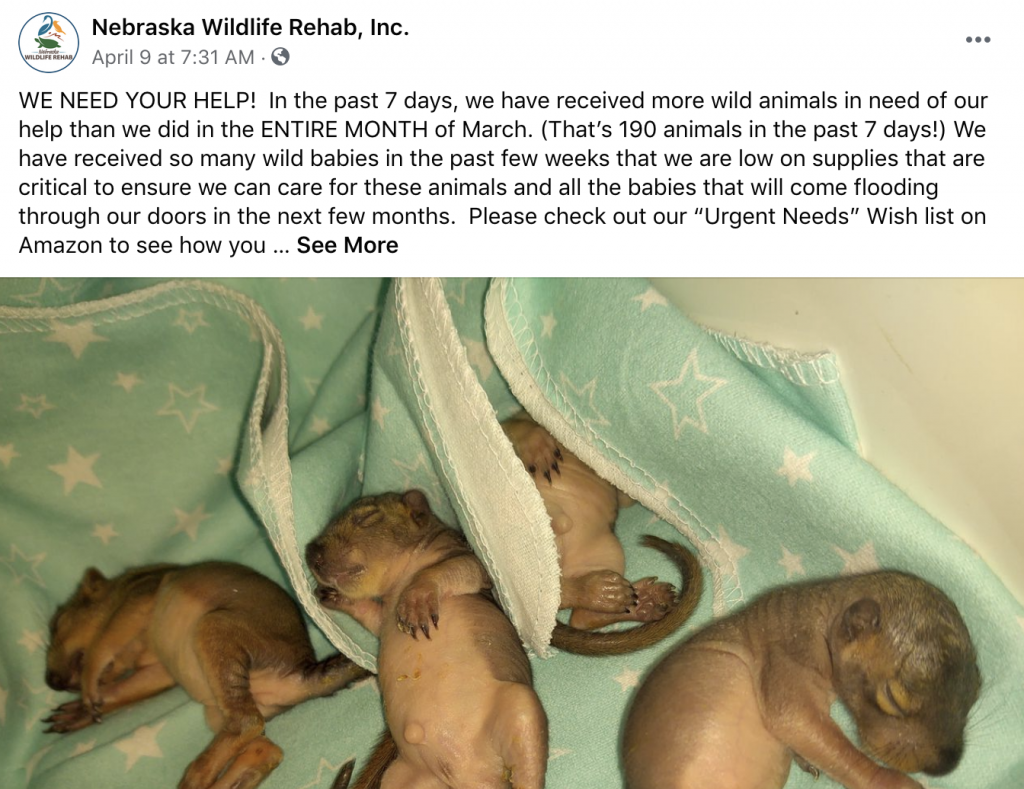 “We wouldn’t be here without community,” Stastny said. “We are so fortunate to live in a city, in a state where people care about wildlife, and they believe in giving back to their community.”

Stastny says community support plays a big role in helping her and her team execute their ultimate mission: To return wild animals back where they belong.

“Wildlife belongs in the wild and it’s only because of the support of the community that we have all the resources that we need to take those animals on their behavioral and their nutritional path through rehab, and to get them out into the wild and give them a chance at success,” she said.

You can learn more about Nebraska Wildlife Rehab here and you can view to “Urgent Needs” wish list here.