Data gathered by Lincoln Public Schools shows that one in four remote students had more than one failing grade.

LINCOLN, Neb. (KLKN) – Report cards from the 2020 school year show that remote learning due to the ongoing pandemic resulted in more failing grades for students nationwide and here in Nebraska.

Overall, LPS saw that 26.9% of the 6,275 students who opted for complete remote learning had two or more failing grades.

“We’re certainly not pleased with the number of failures we have in our remote learning student population but were also not surprised by that number,” says Matt Larson, the Associate Superintendent for Instruction for LPS. “We are hardened by the fact that the percent of our students with two or more failures at the high school level that are remote learners is lower than it is for other major school districts in the state of Nebraska.”

For both middle schoolers and high schoolers, Larson says trends show that those who remained in the classroom full time had no significant impact or change in the number of failing grades.
“The percent of students who had two or more failures in high school if they were 100% remote learners, was higher than the percentage of failures for students that were in-person learners. We know that the hybrid or remote environment is more challenging for students because they don’t have the opportunity to be in school,” Larson says.
There are many other disparities, as well. The data shows that more students of color or of diverse ethnic backgrounds had an increase in failing grades compared to white students.
“The failure rate between remote learners and in-person learners is higher for remote learners across all demographic groups,” Larson said when asked about the differences. 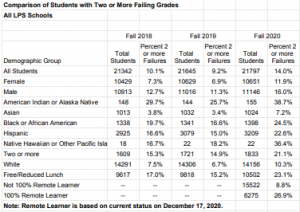 From 2019 to 2020, Asian students in LPS experienced a 100% increase in failed courses, as did Native Hawaiian and Pacific Island students.
American Indian or Native Alaskan students saw a 50% increase.
White students experienced an increase of 53%, while Black and Hispanic students had 47% and 50% increases respectively.

The middle schools with the highest number of remote learners in 2020 were:

The middle schools with the highest number of remote learners with two or more class failures were:

The high schools with the highest number of remote learners in 2020 were:

The high schools with the highest numbers of remote learners with two or more class failures were:

Larson and the Lincoln Public Schools system says analyzing this data is vital to preparing for the next school year, where there will be a more robust online learning program.

“We’re in the process of developing a learning loss plan so that over the course of the next couple of years we can address student needs, intervene, and help ensure all students can graduate on time with their class,” he says.

Bryan Health, LPS team up for training on keeping athletes safe from the heat