YORK, Nebraska (KLKN)-  The March of Dimes conducted a Nationwide study showing the lack of maternity care across the county.

The problem is they list most of Nebraska as being a “maternity care desert,” including York County. 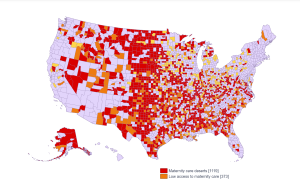 “We are alive and growing, we are not a desert here in Nebraska as far as OB care,” says Carlee Conard, obstetrics and gynecology director at York General.

March of Dimes classifies a maternity care desert if there were no hospitals providing obstetric care, birth centers or no certified nurse midwives.

“When they are pregnant, they go to a York medical clinic and that’s attached to the hospital,” Conard said. “it’s kind of a one-stop shop.”

York General said they are actually planning on growing its OB unit.

“We have four and we are actually getting another one, another female provider which we are super excited about,” said Conard.

They have a goal of around 150 births a year, stating they average no less than 10 births a month.

“We see moms kind of all over the area. We’ve got moms from Gresham, Stromsburg, Seward, Henderson, Aurora, Geneva,” Conard said. “I think we even had a mom come from out of state, she loved her first experience and she came and had it scheduled to be here for her next birth.”

York General feels they are able to serve high-risk pregnancies as well.

“We are also attached to the OR, so for surgeries, C-sections, it’s an easy way for moms to get over there in an emergency situation, but we can handle a lot more than I think people think we can,” Conard said.

Over the last year, the hospital added a lactation clinic, which serves about 165 moms a year.

“It’s been a great blessing to this area because everyone has to travel really far to get those services,” Conard said. “We see moms that not just deliver here but from other rural hospitals that don’t have that service to offer.”

A March of Dimes representative told Channel 8 how they gathered the information shown in the study.

“The classification of maternity care deserts is based on HRSA’s Area Health Resource File,” a spokesperson said. “The variables (hospitals/birth centers/Ob provider data) that are used in the maternity care desert designation were collected in 2019, which is the most recent available national data.”

The U.S. is low on medications for holiday season illnesses