NSP said early Saturday morning, a trooper stopped to check on two vehicles parked near the intersection of Highway 2 and Highway 71, in Box Butte County.

The trooper smelled an odor of marijuana inside one of the vehicles and began to search for the source. He found 5 pounds of methamphetamine and 7 ounces of marijuana alongside a handgun, according to the patrol.

Police said another incident occurred early Monday morning when a trooper made a traffic stop on a speeding car on Interstate 80. The trooper noticed a marijuana container and began a lawful search. 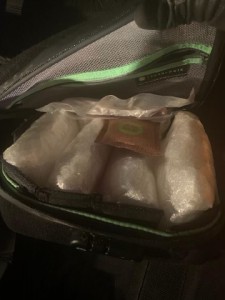 NSP says the trooper found 6 pounds of marijuana in a suitcase and a handgun behind the drivers seat.

Ronneka Blakemore, 29, Marvin McAtee, 29, and Laronte Ivory, 27, all of Louisville, Kentucky, were arrested for possession of marijuana with intent to deliver and possession of a firearm.

Nebraska Gov. Pete Ricketts says he will not call special session on abortion

'That first year we didn't expect anyone, but 10,000 came': Doris Ourecky remembers 61 years of Czech Days