Interest in homeschooling has ‘exploded’ amid pandemic

MISSION, Kan. (AP) — As parents nationwide prepare to help their children with more distance learning, a small but quickly growing number are deciding to take matters entirely into their own hands and begin homeschooling.

Some are worried their districts are unable to offer a strong virtual learning program. For others who may have been considering homeschooling, concerns for their family’s health amid the coronavirus and the on-again, off-again planning for in-person instruction are leading them to part ways with school systems.

Mindy Kroesche, a freelance writer and editor from Lincoln, Nebraska, had been leaning toward homeschooling her 12-year-old son, who has autism and ADHD diagnoses that made middle school a challenge. But she always felt her 10-year-old daughter was “built for school.” Now with the pandemic raging, she is pulling them both out for the year.

“We just saw that with her wearing a mask for the entire day, that would make learning more difficult for her,” she said. “It was going to be such a different environment. We didn’t think it would be as beneficial for her.”

Homeschooling applications are surging in states including Nebraska, where they are up 21%, and Vermont, where they are up 75%. In North Carolina, a rush of parents filing notices that they planned to homeschool overwhelmed a government website last month, leaving it temporarily unable to accept applications.

There were about 2.5 million homeschool students last year in grades K-12 in the U.S., making up about 3% to 4% of school-age children, according to the National Home Educators Research Institute. Brian Ray, the group’s president, is anticipating that their numbers will increase by at least 10%.

Interest in homeschooling materials also has been surging, driven in part by parents who are keeping their children enrolled in schools but looking for ways to supplement distance learning.

The National Home School Association received more than 3,400 requests for information on a single day last month, up from between five and 20 inquiries per day before the coronavirus. The group had to increase the size of its email inbox to keep up.

“Clearly the interest we have been getting has exploded,” said J. Allen Weston, the executive director of the suburban Denver-based group. “That is really the only way to describe it.” 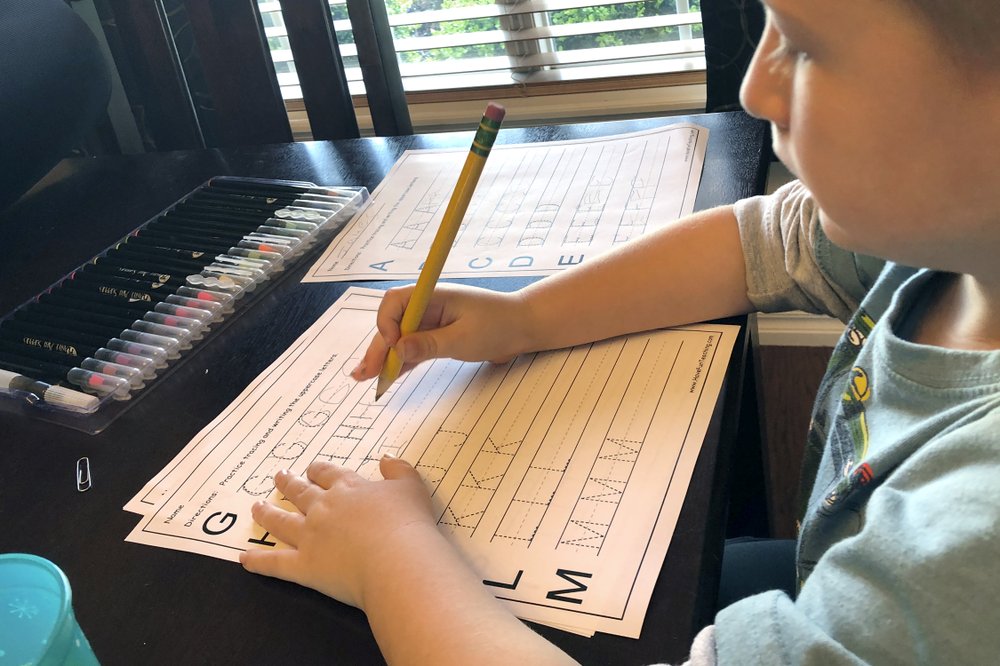 In this March 24, 2020, photo provided by Christina Rothermel Branham, is her son James, doing school work at their Tahlequah, Oklahoma home. Branham, a psychology and counseling professor at Northeastern State University in Tahlequah, said she is going to attempt virtual learning through her local school district for her son. But she plans to switch to a homeschooling curriculum of her choosing if it isn’t going well after about a month, noting that the virtual learning she oversaw in the spring was “very monotonous.” “If there is a lot of stress between the two of us it is probably going to get him pulled out,” she said. (Christina Rothermel Branham via AP)

Some parents in rural parts of Nebraska are turning to homeschooling because staffing and limited access to home internet leave districts unable to offer a virtual learning option, said Kathryn Dillow, president and executive director of Nebraska Home Schools, a support and advocacy group.

Homeschooling applications continue arriving in Nebraska, where the number of homeschoolers already had risen to 3,400 as of July 14, up from 2,800 at the same time a year ago, said David Jespersen, a spokesman for the Nebraska Department of Education.

Jespersen said there is “a lot of confusion” and that “parents are delayed in making their decision” because so much is changing.

Regardless of the final number, Jespersen doesn’t expect that the increase will bust districts’ budgets because homeschoolers will still remain a small fraction of about 326,000 students spread over the state’s 244 school systems.

Most other states don’t have homeschooling numbers, either because they aren’t collected at the state level or it’s too early. But all indications point to increases across the country.

“Now is when the reality sets in,” said John Edelson, president of Time4Learning, an online curriculum provider, which has seen business explode. “People have postponed the decision, but we are at this great inflection point. And it is hard to see what the angle is going to be, but it is definitely up.”

In Missouri, calls and emails pour into the homeschool advocacy group Families For Home Education each time a district releases its reopening plan, said Charyti Jackson, the group’s executive director. She said families are in a “panic” about virtual starts to the year and hybrid plans in which students attend classes parttime and study at home the rest.

“They are asking, ’What am I supposed to be doing with my children when I am working full time?’” she said.

For the families who only plan to homeschool for a semester or two, some in small groups or pods, her advice is focused on how to make sure students can transition back to public schooling smoothly when the pandemic ends. That’s trickier for students who receive special education services and high schoolers who need to meet their district’s graduation requirements.

There also are some indications the exodus to homeschooling could continue well into fall. Christina Rothermel-Branham, a psychology and counseling professor at Northeastern State University in Tahlequah, Oklahoma, said she is going to attempt remote learning through her local school district for her 6-year-old son. But she said the virtual learning she oversaw in the spring was “very monotonous” and that she plans to switch to homeschooling if the first month goes poorly.

“If there is a lot of stress between the two of us it is probably going to get him pulled out,” she said.

Rothermel-Branham, 39, already has scouted out curriculum as a backup and has signed up for art and music classes through Outschool, an online learning platform that is reporting 30 times year-over-year growth since March.

“It is such a big mess,” said Outschool CEO Amir Nathoo. “A lot of schools spent all summer preparing for a social distanced reopening and now it looks like that isn’t going to happen because of the virus.”

He said the demand for classes has been particularly strong in states that moved aggressively to reopen, including Texas, Florida, Georgia and Arizona.

Chris Perrin, the CEO of Camp Hill, Pennsylvania-based Classical Academic Press, said curriculum sales to homeschoolers are up by 50% and that enrollment in its online Scholé Academy has increased by 100% amid the pandemic. He said some there was “understandably a lot of bad online learning” in the spring and that some parents were “appalled” as they oversaw it.

“They are saying I can’t stand by and do nothing,” Perrin said. “So they are becoming homeschoolers.”