"We are held liable for any discrimination or adverse health effects due to mask wearing," says a sign located inside the business.

A Lincoln business has gained attention on social media after saying they won’t be forcing their customers to abide by the mask mandate, which began Monday.

“We felt as a group that we would be endangering our customers whereas where they get to chose to wear a mask or not, they know their health conditions,” says Tommy Laws, a co-owner of The Better Life Nutrition.

The business, located near south 11th and ‘L’ streets, and one of its sister locations , Nutrition Tavern near 56th and ‘O’ streets, have this sign (below) posted in their businesses. 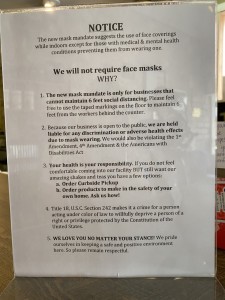 The sign reads that ‘the mandate is only for businesses that cannot maintain a 6-foot distance..” and “we are held liable for any discrimination or adverse health effects due to mask-wearing.”

“We did some digging to some of the governing laws and found that we were putting people at risk by trying to force basically a widespread, like everyone has to wear a mask no matter what, that doesn’t work for individuals,” Laws says.

The sign says by enforcing the mandate, they would be violating the 1st and 4th amendments, as well as the Americans with Disabilities Act. It also sites a constitutional civil law, which states that it is a crime for officials, whether federal or local, to willingly deprive a person of their rights.

“Putting this sign up and educating people on their choice, their laws and stuff was setting a better example for everybody else than just saying ‘ok whatever you guys say, we’ll just follow.”

Channel 8 Eyewitness News reporter Marlo Lundak spoke with several people who sided with the business but declined to comment on camera.

Wyatt Hubbard, a Lincoln resident, says he disagrees with businesses who think like this.

“Those businesses need to realize that we need to wear masks for everyone’s health, it’s not just people who have COVID or are more susceptible to dying from it, that it is for the benefit of everyone in our community.”

The signs and the co-owner both say that no matter your stance, you’re still a valued customer.

Laws also tells Channel 8 that the customers at all three of their locations have been very positive, but he knows that many people don’t agree.

He also says they’re prepared to defend their stance if officials challenge them.

The NTSB wants all new vehicles to include drunken driving detectors