Nebraska health care systems say they are prepared for a high number of patients if confirmed coronavirus cases increase in our state. 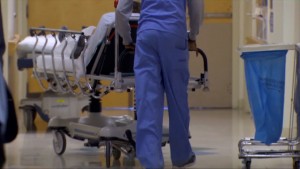 Hospitals and healthcare workers have been feeling the strain on their systems since the coronavirus outbreak began.

Video from other countries shows overwhelmed hospitals by a surge of people seeking care. However, local health care providers are assuring Nebraska residents that they are prepared.

“We still don’t have any confirmed cases in Lincoln yet we have to act as though there are,” says Derek Vance with CHI health St. Elizabeth. “At CHI Health we’re the largest system in Nebraska so we’ve got a thousand beds we can flex up to if we have to with that surge so the capacity is there, but if we get a big surge we’ll really strain that capacity so we’d rather spread that out.”

Spreading things out is exactly what Bryan Health officials say they can do if demand for beds suddenly increases.

“While we are licensed to about 600 beds, we probably have about 525 that are operational in any given day, we are looking at new areas of the hospital and we do have plans for a couple of new units opening up here yet this year,” says Lisa Vail with Bryan Health during a Facebook Live video press conference.

Under normal circumstances, Bryan Health officials say they have anywhere from 50 to 100 beds available. However,  in the event of a sudden surge due to the coronavirus, another 75 beds could be made available quickly.

That, coupled with cancelling elective surgeries and other care, they say will give them the needed capacity.

“We could be using some of our outpatient procedural areas, specialty clinic and so on, so, we have quite the capacity to deal with any surge issues,” Vail says.

The local hospital systems are also cutting back on the number of in person visits with online screening tools and hotlines.

Between CHI and Bryan, they’ve kept roughly 85,000 people out of hospitals with those services since they were implemented earlier this month.

RI leaders warn of price gouging at the pump

'The way we play is just different': Beatrice football works to stay consistent