Multiple seasons happening at one time for start of the weekend

10 A.M. SATURDAY UPDATE:   It looks like the cold front has slid approximately 50 miles further east this morning than originally expected.  Take a look at the temperature difference between Lincoln and Beatrice as of 9 a.m. 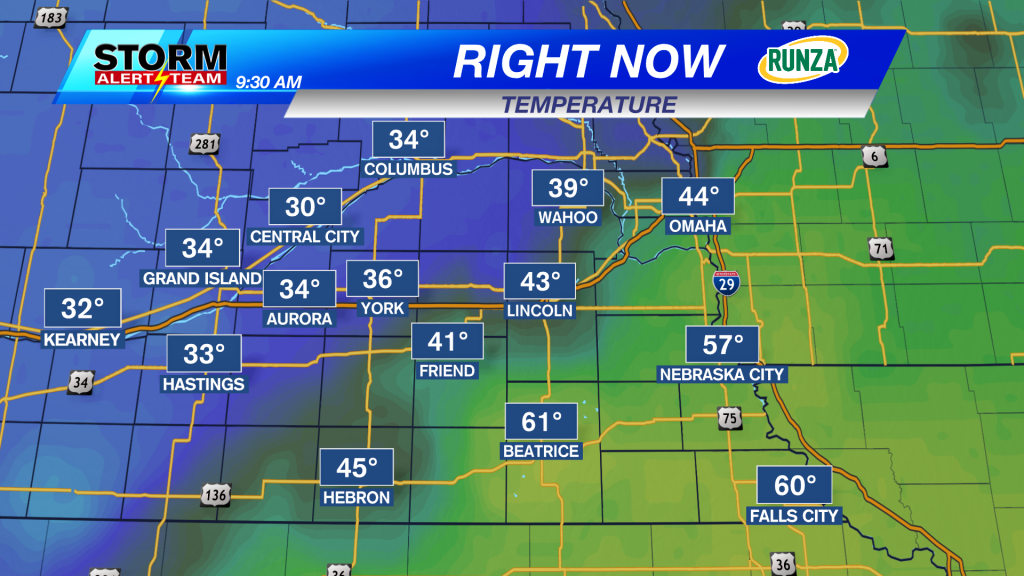 Even over Lancaster County there is a 20° range from the northwest corner to the southeast corner.  Think you can spot the cold front’s location? 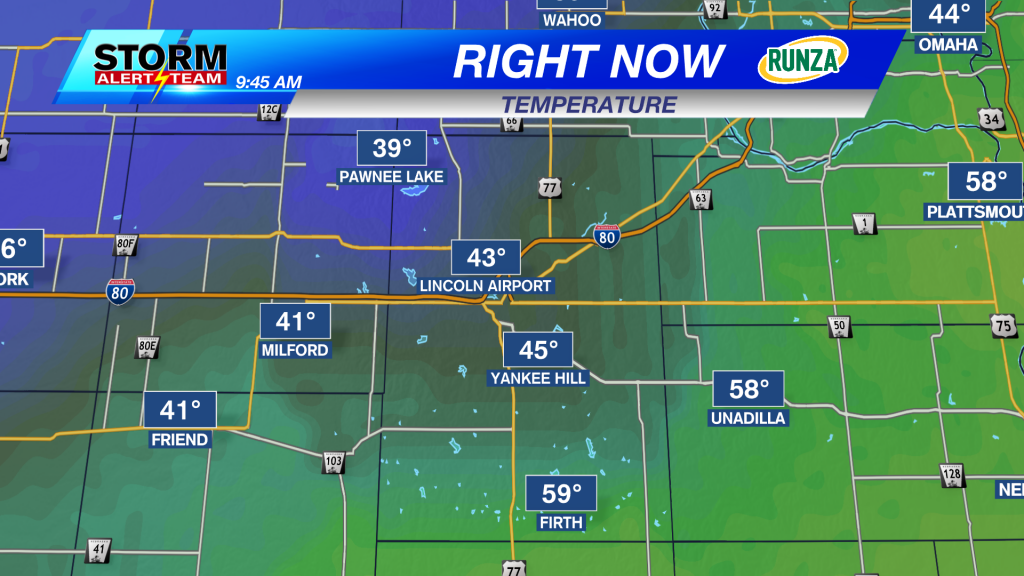 This will have a significant impact on high temperatures today, shifting cooler temperatures further east.   Meaning, highs will likely be in the 40°s and to 50°s in Lancaster County.  This should also shift the threat for afternoon thunderstorms further east. 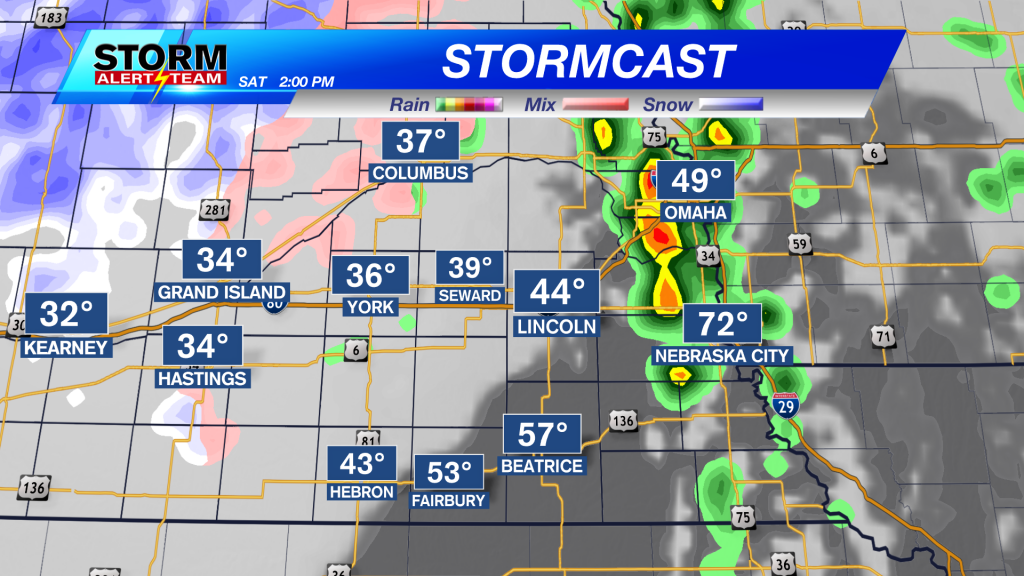 Dramatic swings in weather for southeast Nebraska is expected through Saturday night.  This is all thanks to 1) a warm front that lifted north through the region Friday afternoon and 2) a cold front that will pass through eastern Nebraska Saturday afternoon/evening.

The warm front that passed through the region has allowed warm air to move in to southeast Nebraska.  Not only is it warm, but it is slightly more humid.  Dew points have climbed in to the middle and upper 40°s as of Friday night.  Dew points should climb to the lower 50°s Saturday ahead of the previously mentioned cold front.

Temperatures are going to be all over the place Saturday.  Saturday morning will be greeted with scattered light showers.  Rain should shut off by 10 a.m. at which point clouds will begin to thin.  Areas of southeast Nebraska should see a fair amount of sunshine late morning through early afternoon.  Temperatures will quickly jump once the sun pops out. 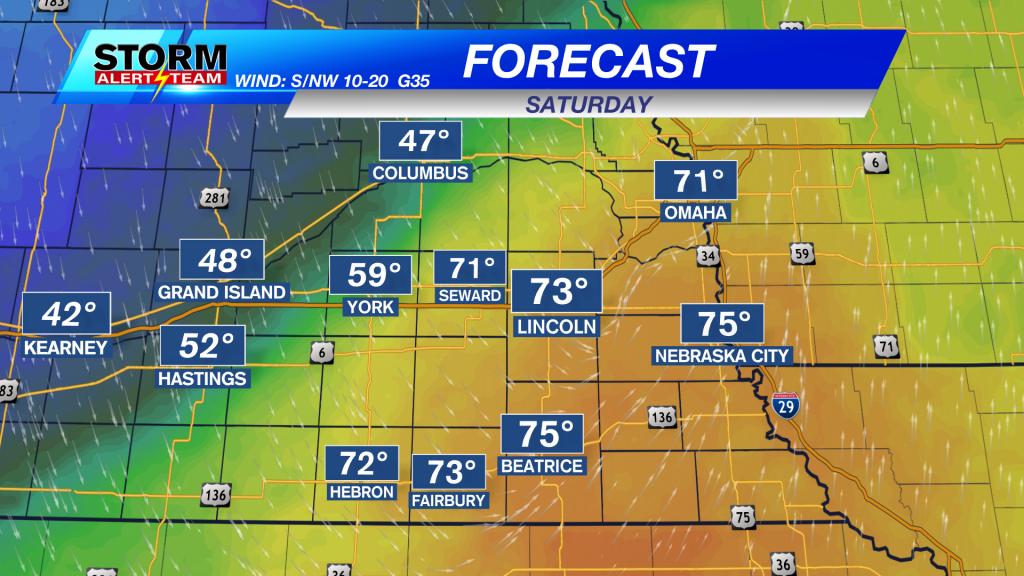 Where the sun does pop, temperatures should be able to quickly rise in to the 70°s.  A few locales may even be able to make it in to the middle 70°s before the cold front passes by late afternoon/evening.

With warmer temperatures and a little bit of low level moisture in place there will be a chance for a few thunderstorms in southeast Nebraska Saturday afternoon ahead of the cold front.

Most computer models project thunderstorms will begin to develop early afternoon.  I am currently targeting a window between 12:30 p.m. and 2 p.m. Saturday.  If any thunderstorms do develop, they should quickly converge in to a line and move to the east/northeast in to Iowa and northern Missouri. 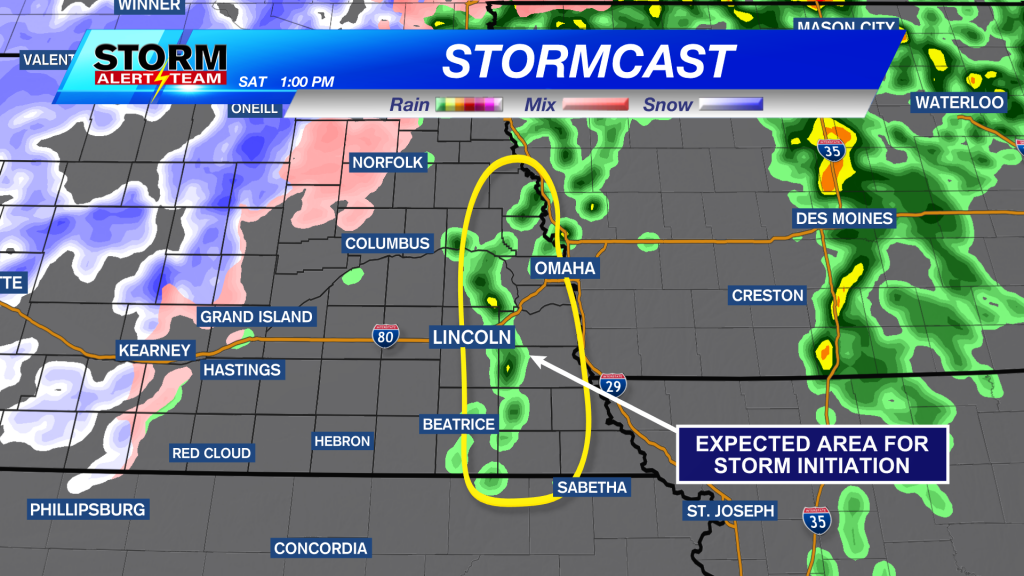 There still remains some question as to exactly where the storm will flare up.  As of now, the thought is they could develop either overhead along a line from Wahoo to Lincoln to Beatrice or 15-20 miles further east of that line.

Travel further west through the state Saturday and there is a good chance you could encounter snow and even a little sleet/ice. 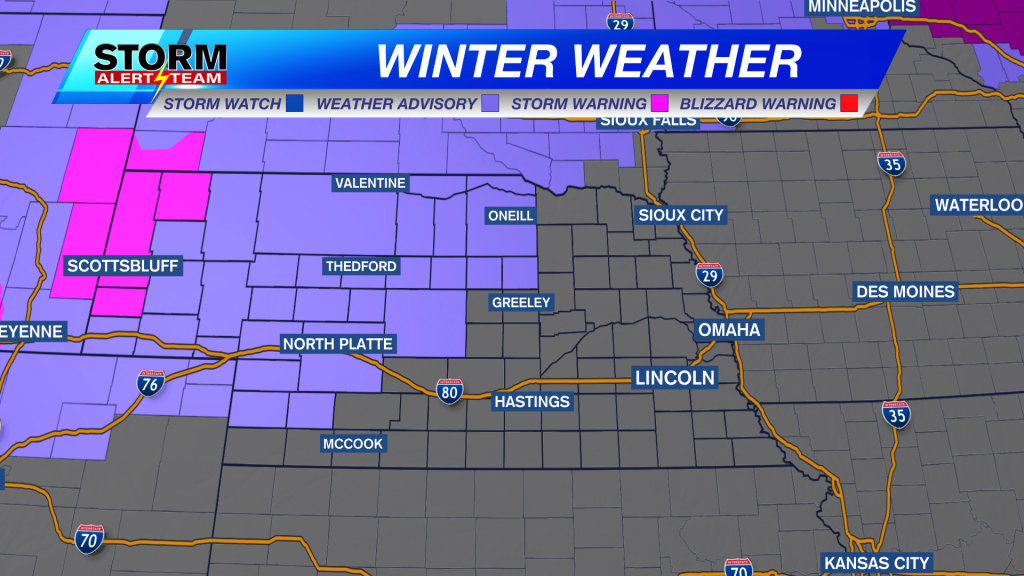 Snowfall amounts could reach 5″ to 7″ when you get in to the panhandle of the state where Winter Storm Warnings are in effect.  Areas further east – from O’Neill to Broken Bow – could receive anywhere from a dusting to 3″ of snow by Saturday evening.  Keep this is mind if your plans include driving through central and western Nebraska.