“I am so creeped out. It’s so scary to think that these drones can just fly and do whatever they want, and there’s nothing we can do about it,” says Devin Groesser, near Gibbon.

Quite the mystery in parts of Nebraska. For over a week, large drones have been spotted flying over head during the evening hours.

“That one is probably about a 4 foot drone, and these definitely look like the wingspan is a lot wider on them,” says Shawn Sullivan, near Wallace.

Sometimes one or two are seen, but other times, groups of up to 20 have been reported. People I spoke to report the drones have a flashing red or green colored light and from best estimations, fly around 200 ft. high. Some have even saw the drones land in a field or yard.

Shawn saw them near Wallace, just south of North Platte.

The sightings began in Colorado and seem to be working their way east.

I spoke to Devin from Gibbon, that’s just east of Kearney. She and her husband have spent a couple evenings spotting the drones with local deputies.

“The Sheriff stood out there with us for probably another 20 to 30 minutes, and the three of us were pointing them out to each other,” says Devin.

So far, no one knows who is operating them.

The Chase County Sheriff’s Office says they have been in contact with the Department of Homeland Security, FAA and FBI. 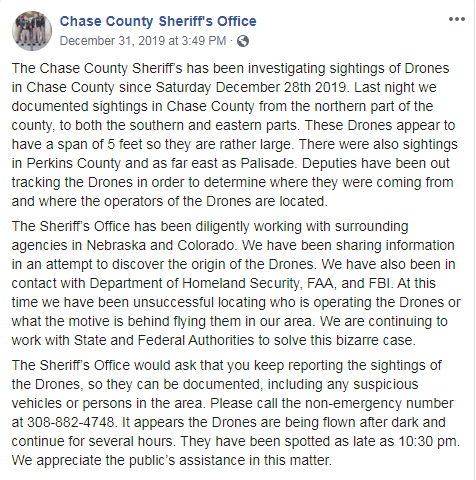 What the drones are doing, isn’t exactly illegal.

“Believe it or not, the air space is considered a public thoroughfare,” says Vic Moss, co-owner of Drone U.

Your land is defined by property lines and it’s up to you to decide who you want to allow on it.

There are no property rights when it comes to the air.

On a related note, you can not shoot down a drone. For more than one reason..

“Drones are powered by lithium polymer, also called LiPo batteries. If you shoot this down, and you bust the battery, and it lands on your house, your house will burn down,” says Moss.

There’s even a Facebook page dedicated to these drones, where people log where they saw them and any pictures/videos they may get of the drones.

The main advice from local law enforcement? Report to them when you’re seeing the drones and how many.

Other than that, they remain a mystery for now.