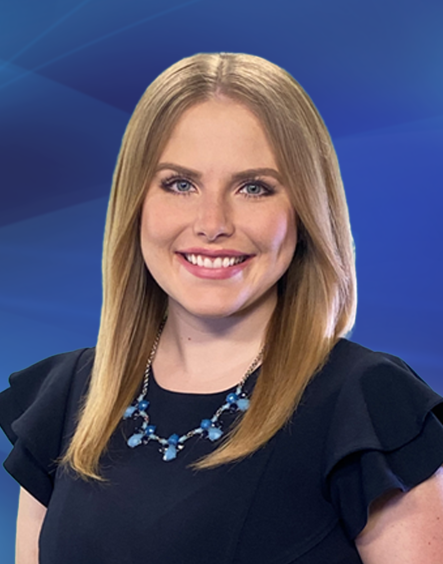 Megan Conway has been at Channel 8 News in Lincoln since 2014. She was first an intern at the station during college and then after graduation, was hired as the morning editor. Megan would go on to be promoted into the roles of reporter, weekend meteorologist, morning anchor and finally, evening anchor in April 2016. She says it’s a dream and a privilege to be doing what she loves in her home state.

Megan grew up on a farm near Indianola, Nebraska. “From the time I could talk, I was on a stage singing, acting, dancing or giving speeches,” she remembers. She loved helping out on the farm and spending time with her Grandma Sina, who was one of the most important and influential people in her life.

The easiest decision in her life was going to the University of Nebraska-Lincoln; she wanted nothing more in the world than to be a Husker. GO BIG RED! She graduated with a degree in Broadcast Journalism.

When she isn’t on TV, Megan likes to go to concerts, play volleyball, hike mountains in Colorado, go hunting or fishing, and watch sports. She and her husband, Max, welcomed their first child, Aurora, in June 2020. She is the light of their life, and keeps them busy, along with their two dogs Reggie & Dennie.

If you have a story idea or just want to say hi, email or reach out to her on social media!

Husker baseball players step up to the plate at Matt Talbot

Emergency landing of plane in field NE of Lincoln

Blue Angels to perform air show in Lincoln in 2023

Lincoln man arrested after high speed chase on I-80

Local hero honored with the Mayor’s Award of Excellence

Johnny Nash, singer of ‘I Can See Clearly Now,’ dies at 80

Stocks drop after Trump calls off talks on economic stimulus