The Huskers will face No. 7 seed Michigan in Thursday's first round. 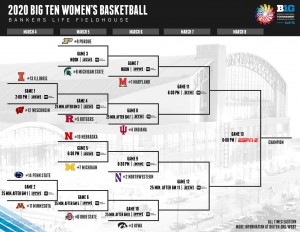 Maryland, ranked No. 7 nationally, and Northwestern, ranked No. 14 by the Associated Press, shared the Big Ten regular-season title with 16-2 conference marks. The Terps earned the No. 1 seed in the five-day tournament, while the Wildcats claimed the No. 2 seed. Maryland and Northwestern joined No. 3 seed Iowa, which is ranked No. 18 nationally, and No. 4 seed Indiana, ranked 22nd by the AP, in earning double-byes in the 14-team tournament.

The Big Ten Tournament opens Wednesday, March 4 with No. 12 seed Wisconsin and No. 13 seed Illinois facing off at 1 p.m. (CT) at Bankers Life Fieldhouse. No. 11 seed Minnesota will clash with No. 14 seed Penn State in Wednesday’s second game.

Action resumes Thursday with No. 8 seed Michigan State tangling with No. 9 seed Purdue at 11 a.m. (CT), before the winner of Wednesday’s game between Wisconsin and Illinois square off with the No. 5 seed Rutgers.

The Thursday evening session tips off with Nebraska and Michigan, before No. 6 seed Ohio State takes on either Minnesota or Penn State in Thursday’s final game.

No. 10 seed Nebraska, which defeated Michigan 74-71 on Jan. 19 at Pinnacle Bank Arena in Lincoln, would advance to face No. 2 seed Northwestern on Friday at 5:30 p.m. (CT) if the Huskers can get past the Wolverines in the tournament’s second round on Thursday.