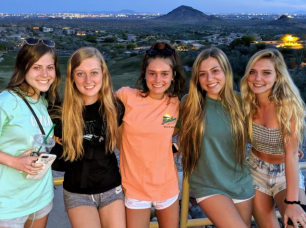 The four girls who were killed in the crash are Alexandria Minardi, 15, Addisyn Pfeifer, 16, Kloe Odermatt, 16, and Abigail Barth, 16.

The lone survivor of the crash is Roan Brandon, 15.

All of the teens are students at Gretna High School.

“You know you can’t protect them from everything and sometimes when kids get together accidents happen. Mistakes are made.” said Kevin Riley, Gretna Public Schools Superintendent.

Riley also said the girls were inseparable; and that they were good girls, who were athletes and in National Honor Society.

Sarpy County Sheriff Jeff Davis said the car was being driven by Abigail Barth. Officials said speed was a factor in the crash.

Davis also mentioned that at least two of the girls were thrown from the car, including the surviving. Brandon is currently at St. Elizabeth Hospital being treated for burns and other injuries, and is expected to survive.

No other information about the crash was released from the press conference Thursday afternoon.

The investigation into what caused it continues.

According to the Sarpy County Sheriff’s Office, on Monday evening at approximately 11:12 p.m., deputies responded to a fatality crash, just west of the intersection of 180th and Platteview Road.

Preliminary investigation appears to show that a Ford Fusion was being driven eastbound on Platteview Road, approaching 180th Street.

For some unknown reason, the vehicle left the roadway, struck the end of a guardrail, and ended up in a ravine.

The vehicle caught fire and was fully engulfed when deputies arrived.  The Nebraska State Patrol also arrived to assist.

There were five individuals in the vehicle at the time of the crash, all believed to be 15 to 16 years old.

One person was taken to a local hospital with burns.

The other four occupants were deceased at the scene.  Three of the occupants have not been positively identified, but officials believe to know who they are.

Names of the victims will be released when positive identification has been made, and the families notified.

This fatality crash in in the very early stages of investigation.

The night began when officers received a call that there was a brush fire near 180th and Platteview Road near Gretna.

Captain Chris Culler says what he encountered at the scene was much worse.

A tragic loss of human life.

“Upon arrival we realized that there was a car engulfed in flames. We found at least one party who was transported to the hospital, and there is at least three fatalities that we know of right now,” said Culler.

The death toll has since risen to four.

The crash itself has left investigators puzzled, as there was only one car involved.

A fifth teenager in the car survived and was taken to the hospital.

Investigators are hopeful that she can provide key insights into what went wrong.

“We do have a deputy on scene now to get a statement from her to find out who was with her, and what they were doing prior to the accident happening,” said Culler.

The lone surviving teen was transported to St. Elizabeth’s Hospital in Lincoln.

She is expected to survive her injuries.

The identities of the four victims who died have not yet been released.

A few of the cars in the lot had flower wreaths displayed on them.

The Sarpy County Sheriff’s Office says the investigation is still in its beginning stages.

We will continue to update this story when more information becomes available.