"We're just trying to help as many athletes as we can understand their NIL potential."

LINCOLN, Neb. (KLKN) – It’s a task that has consumed University of Nebraska-Lincoln junior business major Jake Bowman for much of the past year: helping Husker athletes capitalize on new name, image and likeness rules.

“We’re just trying to help as many athletes as we can understand their NIL potential,” Bowman said.

In 2021, NCAA rule changes allowed college athletes to earn money off of their name, image and likeness for the first time.

“Honestly, I think this is something that should have been here for a long time,” Nebraska sprinter Chris Ramsey said. “But I’m thankful we have it now.”

An athlete in his high school years at Lincoln Christian, Bowman has long wanted to work in sports. 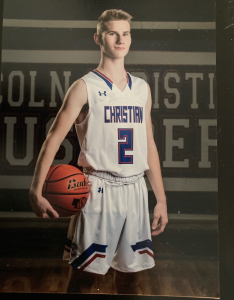 Early this school year, Bowman says, he was approached by Joe Petsick, an executive in residence at UNL’s College of Business, about launching an NIL advisory program to help Husker athletes optimize marketing opportunities.

Every Thursday, advisers set up a table at Memorial Stadium to assist Husker athletes and answer any NIL-related questions they may have.

“Our biggest job is making NIL as easy as we can for them,” Bowman said. “And so that’s kind of what we use as our lens for everything we’re doing.”

Brant Banks is an offensive lineman for the Huskers who recently launched a radio show on 93.7 FM called “Sunday Morning Pancakes” with teammate Nouredin Nouili.

Banks said Bowman and the NIL adviser team have been a huge asset to him.

“They’ve been helping me reach out to different companies and talking to them about possibly sponsoring me for the show,” Banks said. “They’re doing this out of the kindness of their heart, and I’ll take all the help I can get.”

One specific obstacle NIL advisers help athletes work through is how to build their brands without getting in trouble with the university.

Per university rules, Husker athletes are not able to wear the Nebraska lettermark in sponsored advertisements.

But Bowman said there are ways that Huskers can brand themselves as athletes without violating university rules.

“When you’re doing your social media posts that aren’t sponsored posts, wear your Husker stuff,” Bowman said. “That will grow your following, and that’s what companies want.”

“Once you put a sponsored post in, it looks natural, and it helps the companies out and makes your value higher,” he said.

Bowman said he and his brother Caleb have launched a business called Signature NIL, designed to help athletes market themselves, develop content and sell merchandise.

Ramsey, who has over 100,000 followers on TikTok, recently teamed up with Bowman, launching his own line of merchandise as well as the “Timeless Talks” podcast with teammate Niko Schultz.

“A lot of people look up to us as athletes, a lot of people like seeing not only what we do on the field and in the pool on the track, but also our day-to-day lives, and this gives us an opportunity to show them who we are as a person,” Ramsey said.

“We’re just trying to help work with as many athletes as we can, create some really fun content that’s entertaining for fans to watch, where they feel like they’re connecting with these athletes that they see on TV on a more personal level,” Bowman said.

New Girl Scout cookie, a raspberry version of the ThinMint, will be available only online