A fantastic weekend coming for southeast Nebraska.  It involves a lot of sunshine, especially Saturday, and above normal temperatures.

We will see sunny skies throughout the day Saturday.  Temperatures top out 18° to 20° warmer than Friday, meaning highs will be in the middle 50°s to 60°.

Winds will shift around to the northwest, bringing in downsloping winds, which will aid in drying out the air late Saturday morning through afternoon.  This will cause the relative humidity to drop.  In other words, be careful if you are doing any outdoor burning Saturday.  You may want to delay it for a few days if possible.

Sunday will likely be a few degrees cooler than Saturday.  Highs should range from the upper 40°s to middle 50°s, so while cooler – it will still be 10°+ above late January standards.

We continue to monitor the weather for the middle of next week.  Long range computer models continue to suggest the potential for accumulating snow for southeast Nebraska.

There are subtle differences between computer models from their Friday morning runs.  The GFS model keeps the track of the storm further north.  This would bring higher snow totals to southeast Nebraska.  The European and Canadian models take the track 150 to 200 miles south of the GFS.  This would produce less snow for southeast Nebraska.  It would also produce a fluffier snow.

150 to 200 miles is not much of a difference at this distance, especially when the upper-level energy for the storm is still located approximately 3,600 miles away – over northeast Russia – from Nebraska.  This will combine with low pressure moving out of the Gulf of Mexico to produce the storm next week. 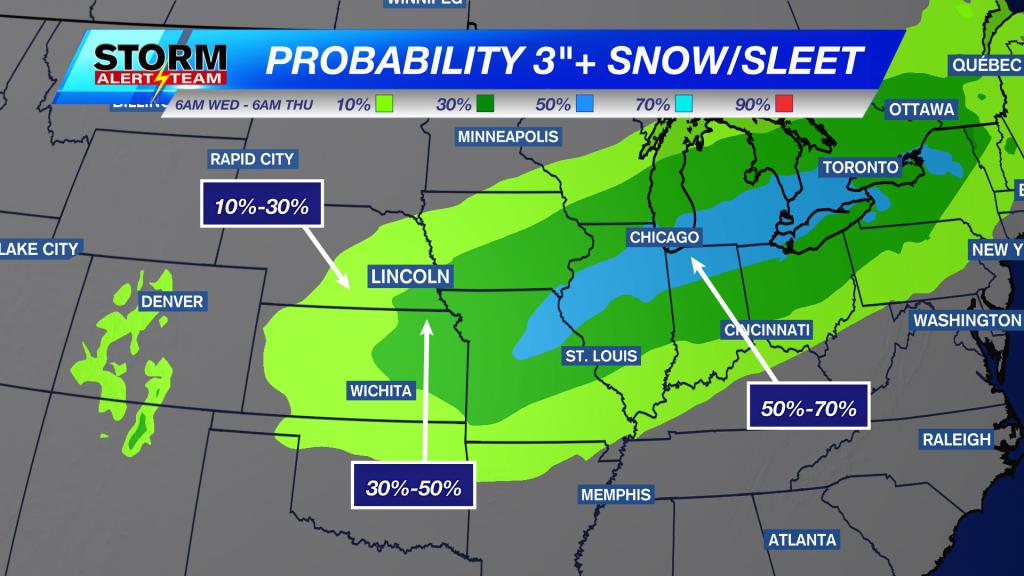 The Weather Prediction Center – the winter forecast arm of the National Weather Service – is projecting probabilities for 0.25″ of liquid available for the production of snow and sleet for the middle of next week.  As you can see from the above map, Nebraska is included in anywhere from a 10% probability to 50% probability of 0.25″ of liquid for snow and/or sleet.  In this situation this looks to be all snow.  Take it at a normal 10:1 ratio and that is where you get the 3″+ projection.

There will likely be changes to the forecast track of the storm as we go through the weekend.  Be sure to keep an eye on the forecast from Meteorologist Malcolm Byron as he will be keeping an eye on it.  Realistically, we may not get a real sense of where this is going until Monday as both surface, and upper-level features, get over land and can be sampled by weather observation sites.

Have a great weekend!