UPDATE MONDAY 10:19 P.M.:  Snow is starting to stick in south-central Nebraska.  This is the view along U.S. 34 & Highway 44 east of Axtell, Nebraska in Kearney County. 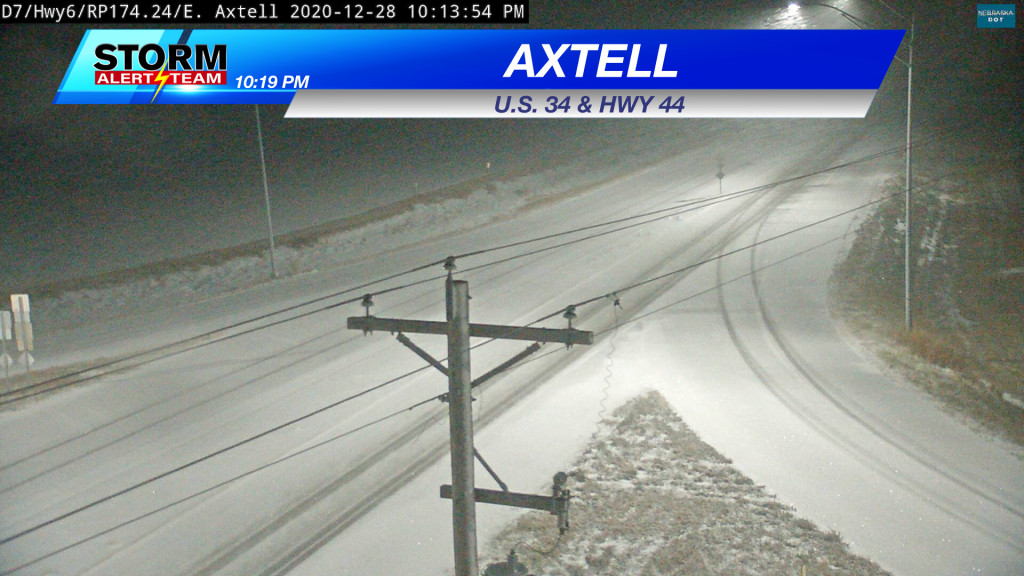 UPDATE MONDAY 9:09 P.M.:  Evening computer models are starting to trickle in.  It is interesting to see how there are definitely two rules of thoughts.  A few of the computer models suggest a warm layer of air, residing 4,000 to 6,000 feet above the ground, causing precipitation to fall as a mix of sleet and freezing rain during the afternoon in Lincoln.  Whereas other’s suggest the precipitation falls as all snow.  If that happens, Lincoln could end up with snow totals on the higher end of the range.  If the sleet/freezing rain happens, the numbers will be on the lower end of the range. 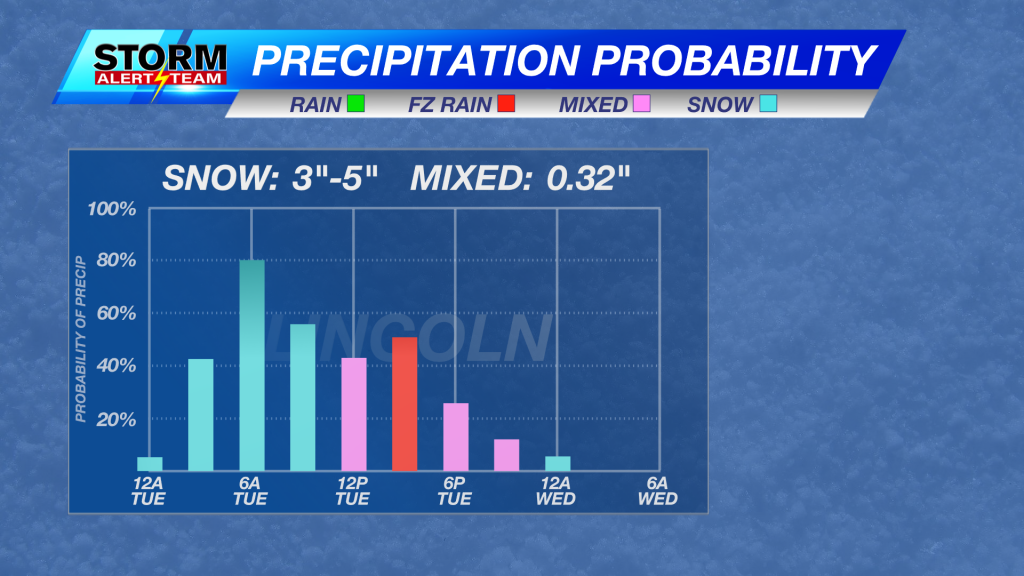 Usually by now you will start to see convergence of the precipitation type ideas.  Doesn’t seem to be the case with this storm.  – Chief Meteorologist John Dissauer

ORIGINAL POST MONDAY 7:12 P.M.: It is a storm we first identified eight days ago.  We tracked it across the Pacific Ocean.  Now it is here.  Ahead of the storm the National Weather Service has issued Winter Storm Warnings and Winter Weather Advisories for the entire state.

There are already reports of snow reaching the ground in North Platte and near McCook this evening.  Snow will continue to spread to the northeast through the evening.  I’m expecting snow to reach Lincoln as early as midnight and it should move out of the Channel 8 viewing area by Tuesday evening.

This is a complex storm with lots of components to it.  (If you scroll down you can take a closer look at some of the things I look at behind the scenes when it comes to forecasting a winter storm.)  This storm will produce snow, sleet, and freezing rain.  And sometimes, all that could fall within a 20-mile stretch.

This system has a decent amount of moisture to work with.  Areas that get all snow will have the chance of accumulating 4″+ by Tuesday night. 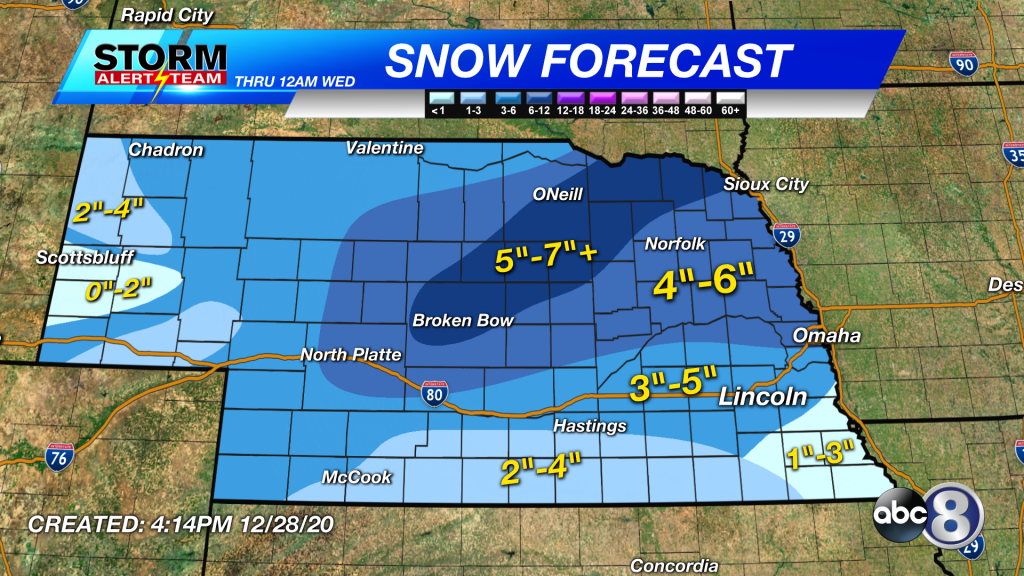 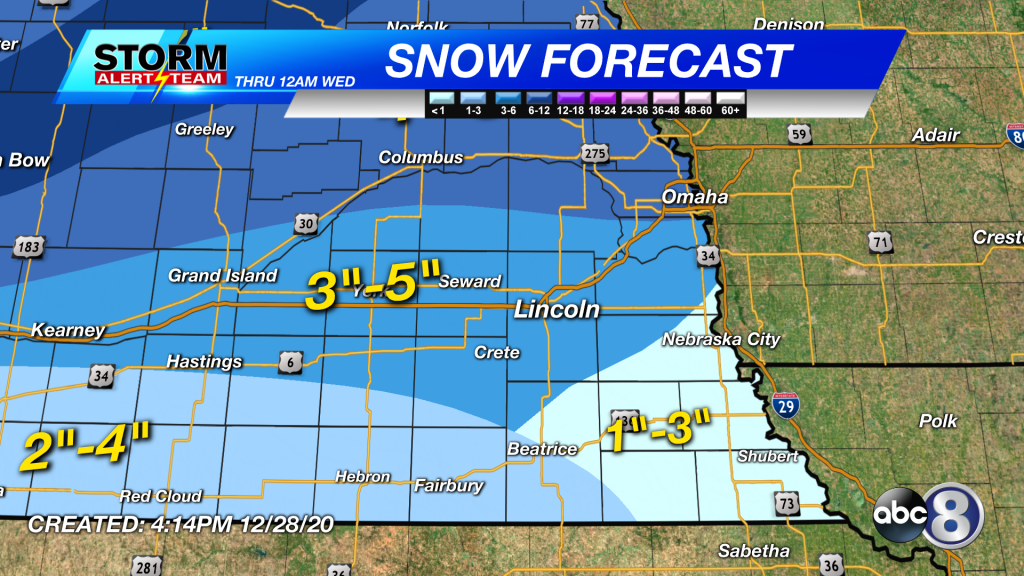 Outside of that area 3″ to 5″ of snow could fall for Lincoln, Seward, Crete, York, Grand Island, Hastings, and Kearney.

South of that band, I think 2″ to 4″ of snow could fall in Fairbury, Beatrice, Hebron, and Red Cloud.

Southeast of there it gets a little more tricky.  I’m currently going with 1″ to 3″, but sleet could eat in to those totals.  Plus, there is the potential for higher amounts of freezing rain there. 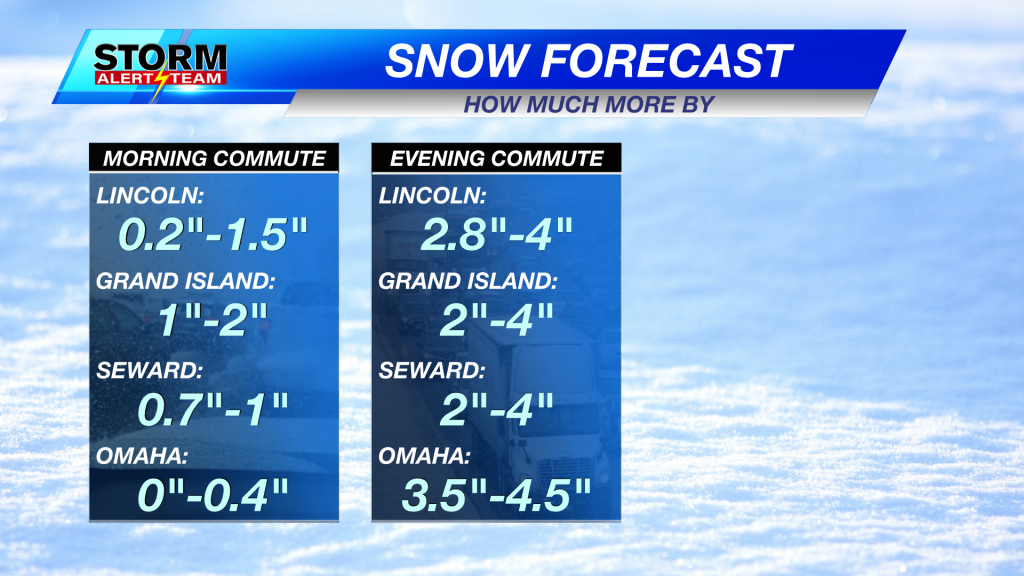 As mentioned, sleet and freezing rain will likely be at play for southern counties in the Channel 8 viewing area.  Specifically, from Hebron, to Beatrice, to Nebraska City.

The amount of sleet or freezing rain will be highly dependent on a layer of warm air between 3,000 and 4,000 feet.  How thick it is.  How warm it is.  How cold it is below the warm layer. 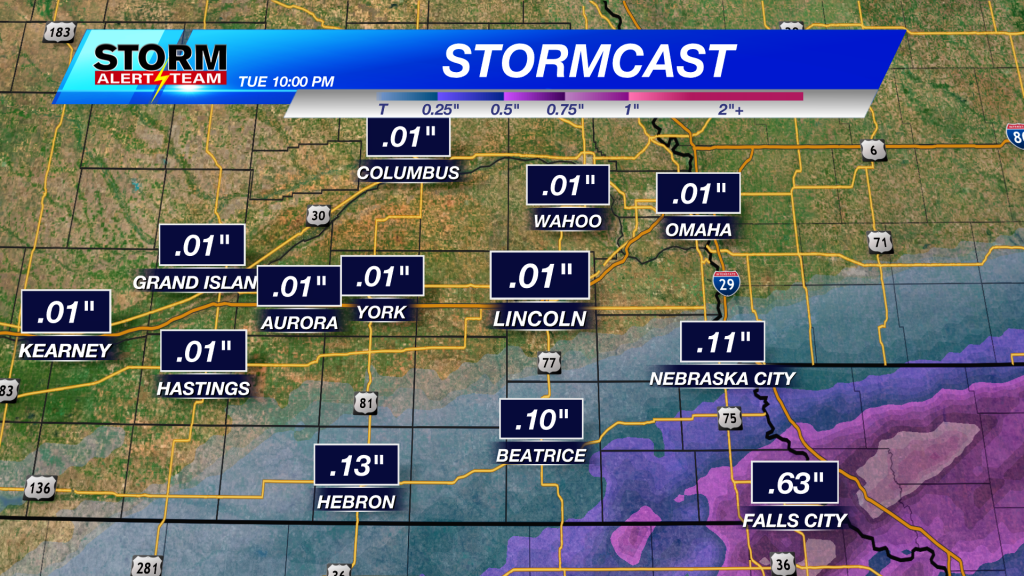 The warm pocket of air is expected to move over southeast Nebraska late morning, and stick around through the afternoon.  This will cause morning snow to change over to sleet and/or freezing rain for the afternoon in the southern counties.

Freezing rain accretion (ice) could amount to 0.10″ to 0.25″, especially towards Falls City.  The computer model shown in the above map is a bit overzealous with the accumulation for Falls City.

I do think sleet may go in to southern Lancaster County during the afternoon.  There is a line I like to use in the winter.  “Sleet eats snow.”  Meaning, when expecting a snow/sleet mix, and sleet develops, it will often rob the moisture expected to produce snow.  If sleet makes it to Lincoln, that could cut down on snow totals for the capital city.

When combining the potential for snow, along with a little sleet and/or freezing rain chance, I am putting my Freak-Out-Meter at a solid 3 out of 10. 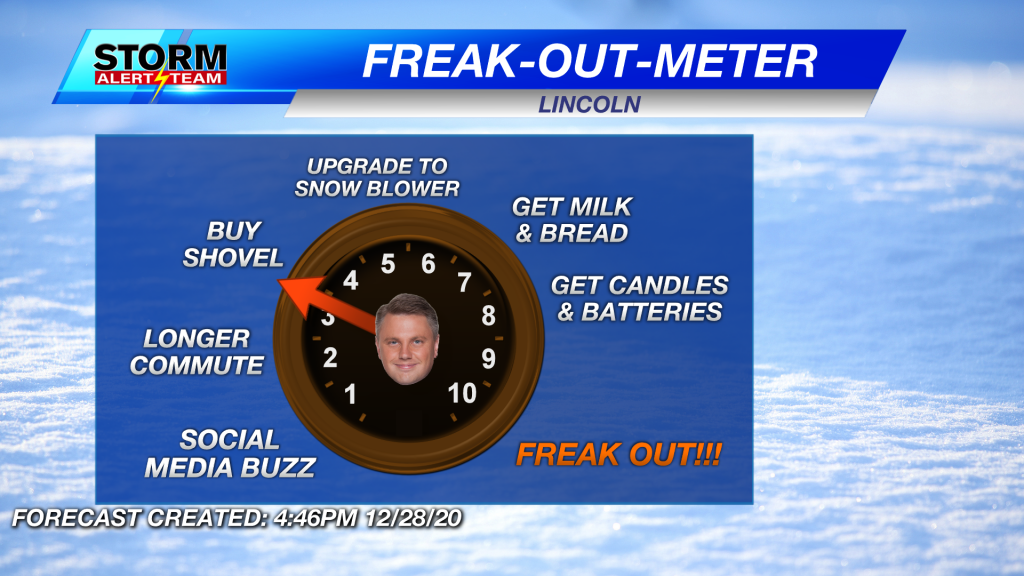 A little look behind the scenes of what we have to look at when making a winter weather forecast. 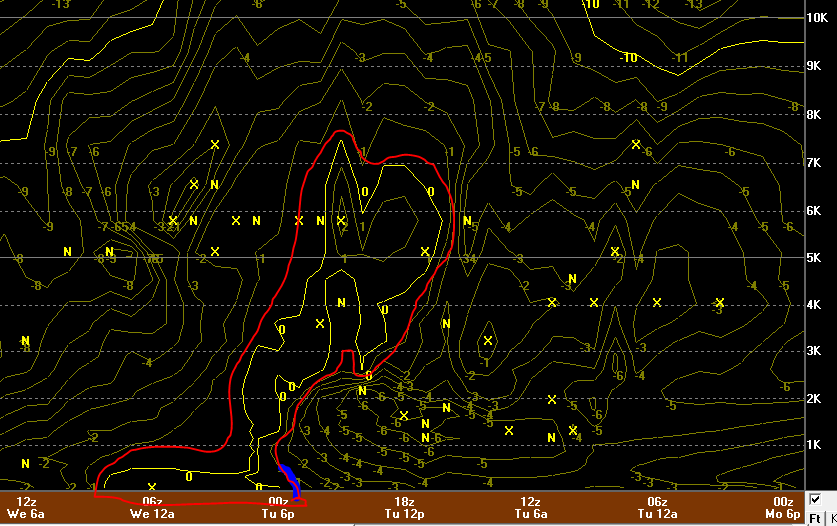 This is a look at one of the various computer models we use to forecast. It is a timeline, going from right to left, showing the temperature through the lower 10,000 feet above Lincoln, Nebraska. Each of the yellow lines represents a temperature in Celsius. The grey horizontal lines represents height above the ground in thousands of feet.

I’ve drawn around the 0° to help highlight where it is. Look at how it starts a few thousand feet above the ground, eventually lowering. Inside of the 0° line you may notice where the air temperature goes as much as 2° Celsius. That indicates a warm pocket of air for a period of time. The pocket is about 500 feet thick.

The other thing we have to take in to consideration… This is only one computer model for one given location. If it is off by even a thousand feet, it can make a significant difference as to what falls.

I also look at 8+ computer models and each can, and usually does, tell me something different.