2021 guide to choosing the safest sunscreen

Do you know what's in your sunscreen? The FDA says many sunscreens have harmful ingredients and aren't even protecting you from the sun.

LINCOLN, Neb. (KLKN)- When we think about sunscreen, most of us don’t think of its harmful effects on our bodies.

The 15th Annual Guide to Sunscreens, published by the Environmental Working Group (EWG), a consumer organization that advocates for environmental safety, says that when it comes to choosing the right sunscreen for you, be careful to avoid products that contain harmful chemicals and false advertising claims.

This year, EWG analyzed over 1,800 products and found that 75% of them did not give adequate sun protection or included ingredients linked to harm.

“The answer is not to throw up our hands and say no sunscreen is safe,” said Nneka Leiba, EWG’s vice president of healthy living science. “There are at least 200 recreational sunscreens in our database that got a thumbs up.”

SEE ALSO: How much is too much caffeine?

According to the FDA, after a single application of sunscreen, a total of seven chemicals commonly found in it can be absorbed into the bloodstream at levels that exceed safety thresholds.

In a study by the FDA, they found that after four days of using sunscreen, the study’s participants still had unsafe levels of two of the chemicals–oxybenzone and homosalate–in blood samples taken 21 days after subjects had stopped application.

But the FDA claims this doesn’t necessarily equate to those products being unsafe to use, but the manufacturers need to perform the appropriate safety tests.

MORE: New study finds getting less than 6 hours of sleep raises your risk of dementia

The FDA has been asking manufacturers to research those chemicals and a dozen more for years now so they can be considered “generally recognized as safe and effective.” 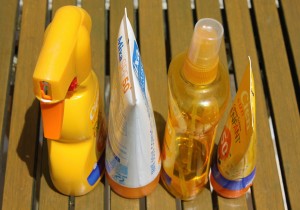 For an alternative to sunscreens with harmful chemicals, the FDA considers two types of mineral sunscreen ingredients to be safe and effective: titanium dioxide and zinc oxide.

Sunscreens with chemical filters absorb the UVB rays and release heat as they break down, but sunscreens made with minerals physically deflect and block the sun’s rays.

Also, mineral ingredients don’t seem to have a negative impact on the environment.

A common misconception of sunscreen is that the higher the “sun protection factor”, or SPF, the better the sunscreen it is, but the data doesn’t support that.

The FDA says that a sunscreen claiming an SPF of 100+ is false advertising because there isn’t any good data that shows sunscreens can protect past a level of 60+ SPF. This can lead to consumers having a false sense of sun protection from products with a high SPF.

Also, SPF only applies to the UVB rays that cause sunburn but not the UVA rays that experts say good deeper into the skin, causing aging and long-lasting damage to skin cells.

To combat this misconception of protection, dermatologists recommend using a sunscreen labeled “broad-spectrum”, which means it will protect against UVA and UVB rays.

More ingredients to keep an eye out for are licorice, aloe, and chamomile. EWG says that these are anti-inflammatories that sunscreen manufacturers are adding to their products to reduce skin reddening, the number one sign of sunburn.

A quicker & cheaper test for concussions created by UNL researchers