Top U.S. airlines are reporting fewer ticket cancellations and signs of improving demand.  Delta Air Lines saying it could break even at the end of the year. Southwest Airlines says the number of flight bookings outpaced cancellations in May.

There were far more cancellations than bookings for most of March and April. Southwest planes were only 8% full on average, and revenue tumbled 90% to 95% from a year earlier.

Delta added about 100 flights a day to its schedule through June, Jacobson said. That allows Delta to leave 50% of first-class seats and 40% of economy seats open on flights, to allow for social distancing between passengers.

Passenger traffic at Lincoln Airport experienced a dramatic drop this spring.  In April 2019 more than 27-thousand flew out of Lincoln.  In April of 2020 that number dropped to 705. 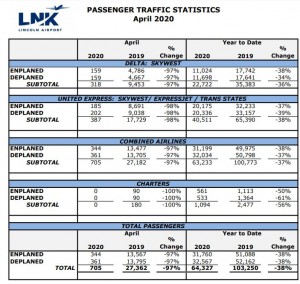