Quiet and calm conditions with clear skies on Thursday morning will quickly change with a cold front headed our way. Temperatures will gradually warm up into the 60s by the later morning hours with sustained winds increasing to anywhere from 10 to 15 miles per hour over the next several hours. 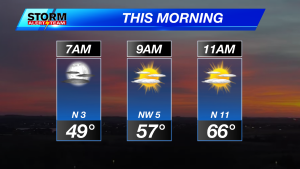 Plan on a breezy day today starting by the later morning hours on Thursday. With a cold front on its way, winds will stay out of the north and gusts anywhere from 15 to 25 miles per hour throughout the later evening hours as well. Winds will make temperatures feel a touch cooler this afternoon but not as cold as the air moving into the area for Friday and Saturday morning lows. 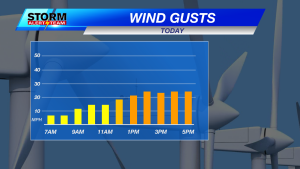 Fall-like temperatures around normal in and around Lincoln, but areas off to the north will experience the passing front sooner rather than later with highs struggling to make it into the 70s. On the other hand, temperatures similar to yesterday will be seen in southeastern cities along the Kansas and Missouri borders. Cloud cover will increase throughout the day following the front for partly cloudy skies Thursday evening. 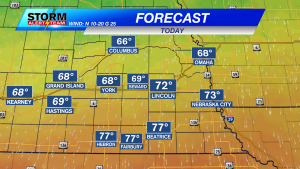 There’s still a frost potential into the morning hours Friday but widespread frost will be more likely on Saturday. Temperatures will need a couple days to return back to normal, so highs in the 50s and 60s to begin the weekend.