Police officers lined the back of the chamber as council members voted 5-0 to pass the measure. 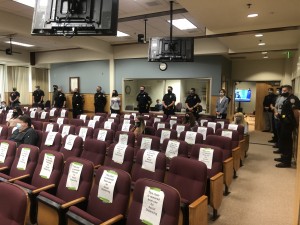 “These past three weeks we have experienced a unity in our community that transcends the divisions of what can feel like a very polarized world,” she said. “Members of our community gave blood, gave donations, they gave whatever they could – fundraisers – for Investigator Herrera’s family.”

A criminal defense attorney who knew Herrera through work said Herrera was “one of the best individuals you could work with, even on the opposite side of the table.”

Council members and others in attendance gave a standing ovation after the vote results were read.

You can read the full resolution below: