Inflation is at a 39-year high in the United States, with consumer prices up 7.5% since December of 2020.

‘The comprehensive nature of this inflation is unlike anything we’ve seen,” says Mark Whitehead of Whitehead Oil Company, who has seen the impact of inflation in fuel prices, convenience store sales, and employee wages.

University of Creighton economist Ernie Goss says that pandemic stimulus programs have contributed to the mass inflation in the U.S.

“The federal reserve increased the money by between 35 and 40% since pandemic began, and you’re seeing the outcome,” Goss said.

Inflation has impacted food costs, cost of living, and perhaps most prominently, fuel prices, which are up 48.5% since 2020 in the Midwest.

John Hansen, president of the Nebraska Farmers Union says that inflation has exacerbated preexisting lack of competition issues in the agriculture industry, which has resulted in higher grocery prices.

“In all of the sectors that ag does business with, it’s hard to sort out the impact of just your garden-variety inflation and the amount of competition that is not there, which causes prices to go up far faster than they should from either just normal inflation or from supply chain issues,” Hansen said.

According to the U.S. Bureau of Labor Statistics, fruits and vegetables are seeing a 7.4% increase in cost, cereal and bakery prices are up 5.6%, and meat prices are up 13.5% in the Midwest from December 2020 to December 2021. 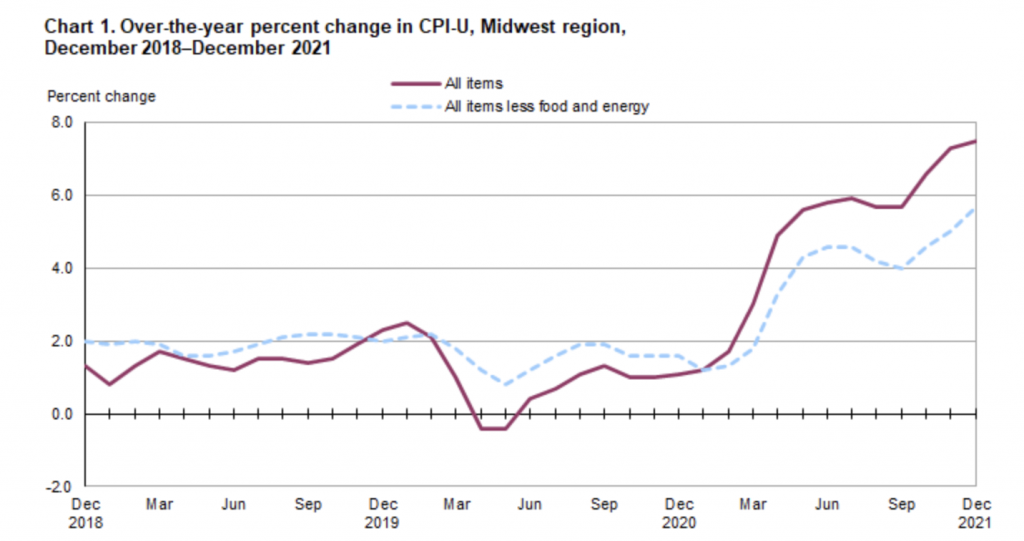 “The people that are suffering are those on fixed incomes, where their income levels are not going to increase along with inflation,” Whitehead said.

Goss says he expects inflation to continue to impact rent and housing prices, property taxes, and interest rates in the months to come.

“Individuals that are living paycheck-to-paycheck, lock in any interest rates,” Goss advises. “If you can borrow, borrow now. Don’t wait to borrow. You’re going to get a better rate today than you’ll get mid-year.”

Jerome Powell, head of the Federal Reserve, hinted on Wednesday that the Fed could raise interest rates as early as March 2022 to help curb inflation.

New Girl Scout cookie, a raspberry version of the ThinMint, will be available only online