Professor Zachary B. Smith tweeted about a planned rally to support law enforcement, where he compared it to a "White supremacist rally".

A tweet by a Creighton professor has sparked a storm of controversy. The tweet by History of Christianity Associate Professor Zachary B. Smith implied that the planned Saturday morning rally called Back the Blue was a display of white supremacists showing off racism in the Midwest. 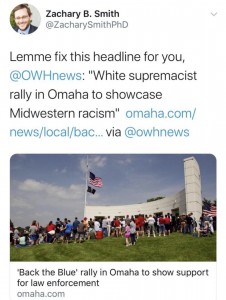 Many people on Twitter as well as a letter from the Creighton chapter of College Republicans asked for the professor to apologize.

The University issued a statement regarding the incident:

Views expressed by a Creighton University faculty member on his personal social media account concerning the Back the Blue event are not those of the University. Additionally, the faculty member regrets his statement and sincerely apologizes for the offense it has caused.

Creighton believes statements of this nature impede our goal of promoting unity within our community, including our effort to confront and eliminate systemic racism. Creighton is an institution guided by Jesuit, Catholic values and traditions, including inquiry and discourse that reflect ethical and critical thinking, and respect and care, for all persons.

Sisters honor two essential workers after passing of their mother

Former school board member weighs in on schools reopening

BUCKLE UP: A startling crash caught on camera

Florida woman found in Omaha, collapses in the arms of officers, pronounced dead later that day