On Tuesday, continued to see video surveillance from across the state as the prosecution showed the days before and after Loofe went missing.

LEXINGTON, Neb. (KLKN) – 10 days into the trial of Bailey Boswell for the killing of 24-year-old Sydney Loofe in November of 2017, the jury heard more testimony from witnesses about Boswell and Aubrey Trail’s whereabouts the day of and after the evening that evidence points to Loofe being killed. Trail has already been convicted of first degree murder in Loofe’s killing, and was is awaiting a hearing that will decide if he faces the death penalty.

On Tuesday, a series of hotel employees and business managers were called to the stand, as well as investigators with the Lincoln Police. Investigator Chris Milisits testified that he was tasked with obtaining the security footage from The Home Depot on north 27th street in Lincoln, as well as video from Menards, where Loofe was working.

The date in question is again November 15, 2017. Milisits says he obtained a The Home Depot’s footage where Boswell and Trail are seen making a purchase, as well as got a copy of their receipt. He then went through the store and purchased the exact items the couple purchased, which included a hacksaw and blades, snips, plastic sheets and other items.

LPD Investigator Matt Franken later testified to video footage from Menards on that same day. Loofe was scheduled to work from noon to 6p.m., and is seen on camera checking in and preparing for her shift at 11:59 a.m. As she leaves the front entrance of the store to go to her post, Aubrey Trail is then seen crossing paths with her, glancing over his shoulder to look at Loofe as she walks out. 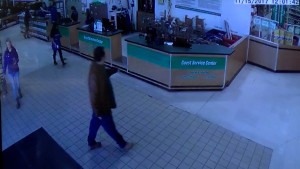 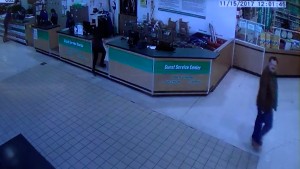 Investigator Franken says at that time, Trail is seen reaching into his pocket, and phone records show he made a brief, 1-minute phone call to Boswell. Trail spends close to 20 minutes in the store, purchasing a few items including Drano.

When Loofe is seen leaving work that evening around 6 p.m., Investigator Franken said to the jury, “That’s the last time we ever see her on camera.”

"That's the last time we ever actually see her on camera."

The last time Sydney Loofe was seen alive is here, when she was leaving her job at Menards around 6:00pm on November 15th, 2017. About an hour later, she was with Bailey Boswell and was never seen again. @Channel8ABC pic.twitter.com/2G27LVKm7l

Continued from Monday’s testimony, the movements of Boswell and Trail were explained to the jury in the days before and after Loofe went missing.

The prosecution also called the head of security, Chris Hamblin, from the Ameristar Casino in Council Bluffs. On Novemeber 17 through the 19, Boswell and Trail’s phones were tracked there, and surveillance video from the hotel and casino there confirm their presence there.

Hamblin says at the casino if someone appears under the age of 40, their ID needs to be checked and is then entered into their system. This is what happened with Boswell. They then traced her steps on video footage to see when she came/left.

Also on the witness stand Tuesday morning were hotel clerks from Grand Island and Kearney, who testified to more security footage of Boswell, Trail and a woman involved with the couple name Kaitlyn Brandle.  Brandle is set to testify later this week.

On November 19, just days after Loofe was reported missing, Brandle checked in to the Boarders Inn & Suites in Grand Island, requesting a room for three people on the first floor. Pam Wright with the hotel was on the stand to testify to their hotel registration and video.

In hotel footage, Brandle and Boswell are seen checking in. The group later extended their stay until November 22, but left on the 21.

On November 21, Ayla Frerichs with the La Quinta Inn located in Kearney, testified that Brandle called the hotel, requesting a first floor room for three adults. After five minutes of being in their room, the three – Boswell, Brandle and Trail – leave the hotel and never come back. Frerichs tells the jury and prosecution that she thought it was unusual.

On the hotel’s video surveillance, Brandale is seen checking in. Then her, Boswell & Trail are seen loading their luggage into a cart & taking it to their room.

Last to the stand before the lunch break was another one of Sydney Loofe’s closest friends, Terra Gehrig. The prosecution began by asking Gehrig about her final conversations with Sydney through text, where they talk about her first date with Boswell, who she met on Tinder. At the time, Boswell was using the fake name Audrey.

In the text messages shown to the jury, Loofe texts Gehrig “Just got home from chilling with a super cute girl” after her first date with ‘Audrey.’ She also mentions how she felt good that day, and thought that her new medication must have been working fast. When Loofe’s mother, Susie, testified on day one of the trial, she mentioned that Sydney went to the doctor the Monday before her disappearance to get a new medication to treat her depression and anxiety.

The prosecution also asked about Sydney’s intentions for being on Tinder, the dating app. Gehrig said Sydney was looking for companionship, and expressed to Gehrig that she hoped ‘Audrey’ didn’t have a boyfriend. Gehrig told the prosecution that in her past experiences on Tinder, Sydney had met with girls who expressed the desire to invite a man into the relationship, which Gehrig says Sydney wasn’t interested in.

The afternoon testimony consisted of just one witness, Special Agent Mike Maseth, one of the lead FBI investigators in the Sydney Loofe case.

The prosecution jumped around the timeline of events with Maseth, but the most important part of his testimony came when he explained he gained access to both Loofe’s iCloud account, as well as Boswell’s iCloud account after her arrest in Branson, Missouri on November 30.

In Loofe’s iCloud, a photo of her was found in a multi-colored Victoria’s Secret bra, which investigators quickly realized was the same bra that was found near Clay Center, where her body was recovered.

In Boswell’s iCloud account, investigators found a photo of her from mid-October, before she met Loofe. Boswell is seen standing in the mirror with a pair of navy colored pajama pants with silver stars on them. Mike Guinan for the prosecution then held up a piece of evidence that was found in Clay Center with Loofe’s body, and asked Maseth to describe what he was holding. 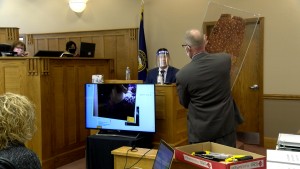 “It’s a star-patterned pajama pant with dark blue stitching and orange-ish discolored, dark colors, lighter colors,” Maseth responded. Previous testimony has indicated that the pants had been bleached, but DNA analysts were still able to test blood stains on the pants that matched with Loofe’s DNA.

During cross-examination, Todd Lancaster with Boswell’s defense asked Maseth about other photos he found in Loofe’s cell phone, including a screenshot of a Snapchat conversation she had with a man named Michael. In the conversation, the two are seemingly arguing about Loofe’s relationship with him as well as with another male, indicating that in the months before her death, Loofe may not have only been interested in women, as many people, including her friends and mother, have previously testified to.

Lancaster asked Maseth about a series of photos on Loofe’s iCloud account that showed her holding or smoking marijuana, or captured marijuana paraphernalia, in an attempt to show Loofe in less of an innocent light.

After three hours of testimony from Maseth, court was adjourned for the day.