Elizabeth Warren drops out of the presidential race 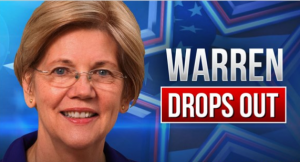 Elizabeth Warren is dropping out of the  presidential race. The Massachusetts senator is announcing her decision on a staff call Thursday morning.

Warren’s path to the nomination has been narrowing since the first round of voting in Iowa, where she placed third. She dropped to fourth place in contents in New Hampshire and in South Carolina she came in a distant fifth.

There’s no word on Warren’s plan to endorse the remaining candidates, Joe Biden or Bernie Sanders.

A local neighborhood gets creative to celebrate July 4th

LPD: Officer saves life of man who jumped from bridge onto I-180

LPD: Man breaks in, beats his own mother unconscious