Christopher Schmidt, who police say is a 53-year-old homeless man, refused to leave the Taco Bell near Northwest 15th and West O Streets around 9 p.m.

Employees Lucas Smith, 18, and Caleb Baumgartner, 19, then started a fight with Schmidt, according to Lincoln Police. 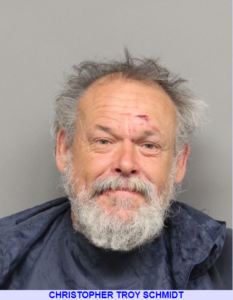 Witnesses told officers that Schmidt was hit with an aluminum broomstick and a metal chair during the fight, police say.

Schmidt was then locked out of the restaurant.  He started hitting the door with a metal rod, which caused about $400 in damage.

Police were called after he shattered the restaurant’s door.

Police say Schmidt was arrested on suspicion of injuring or destroying the property of another.

Missing Lincoln inmate convicted of sexual assault back in custody