LINCOLN, Neb. (KLKN) – A family ranch that had been around for generations was reduced to rubble during the wildfire near Gering.

Josh Ewing, who once lived on the western Nebraska ranch, said his family all has deep connections to the ranch and the land it was built on.

Josh said he grew up visiting his grandparents on the ranch and helping out with chores such as fixing fences, digging up cattle guards and pulling weeds in the garden.

More recently, Josh’s parents, Carolyne and David, have been living there, raising cattle.

When the wildfire started burning a few miles south of the ranch last weekend, Carolyne sent Josh photos of the smoke approaching over the bluffs. Being a volunteer firefighter, he told his parents to get out of there immediately.

He said his father made it out just in time, “seeing the ranch burn down in his rearview mirror as he drove away.”

Josh said his family is reeling, as his parents have lost “virtually everything,” including handwritten recipes his mother had made and kept in the kitchen cabinet.

He described it as “a loss to humanity.”

“Hanging above the mantle was the rifle that came out with my great-great-grandfather on a covered wagon,” Josh said. “Hopefully we’ll find the gun barrel in the ashes somewhere when it’s safe enough to go back in there, but our parents literally lost everything.”

Carolyne and David are hoping to rebuild, but it will be difficult, as not only the house, but the land it was on, has been decimated.

The Ewing family has set up a GoFundMe page asking for help.

“We’re really thankful for the generosity of our neighbors near and far that have been donating,” Josh said. “We met with our insurance agent, and it’s really clear that Mom and Dad are underinsured, as most Americans are, to be able to rebuild in this really inflated economy we have right now.”

Kirsten Ewing, Josh’s wife, said the last few days have been a “surreal blur,” with a combination of sadness and gratitude toward those who have donated. She said Carolyne and David have a safe place to stay for now, and so the “rebuilding of life” can begin.

“It goes to show the way Nebraskans are,” Josh said. “We like to take care of our neighbors and our communities and make a living in a way that we can support other people, and that’s surely showing up with this.”

Many people have been impacted by not only the Gering fire, but wildfires across the country. Josh said growing up, he never had to worry about wildfires in this area, but with climate change, the environment is becoming drier and hotter.

“The fact that 20,000 acres can burn in a matter of days, and places that never had to deal with fire before, it means our world is changing,” he said. “I certainly hope these sorts of incidents help inspire us all to do something to be ready for that change and help stop the change going forward.”

Josh also praised the work of firefighters and said that although they weren’t able to save their ranch, they did save many other houses and properties.

Since last weekend, a team of over 35 fire departments from across Nebraska, Wyoming and South Dakota have been working to contain the fire, which is expected to be fully under control soon. 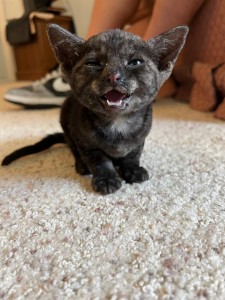 Smokey the kitten, found in the wreckage from the fire

In a small spark of hope, the Ewings found a kitten alive inside a three-car garage that burned to the ground.

The kitten had been born a few weeks earlier and was living inside a cinder block in the garage.

Upon returning to the rubble, the family heard a meowing coming from where the garage used to be and found the cat.

The family has named the kitten Smokey.