How do fireworks get their bright, vibrant colors?

Have you ever wondered how fireworks get their bright, vibrant colors?

With the 4th of July just around the corner, fireworks of all sizes will be exploding in the sky, creating “ohhhs” and “ahhhs” from spectators.

But have you ever wondered how fireworks get their bright, vibrant colors?

The colors are created by the use of metal salts. These metal salts are packed into a firework in pea to plum sized pellets that are called stars. 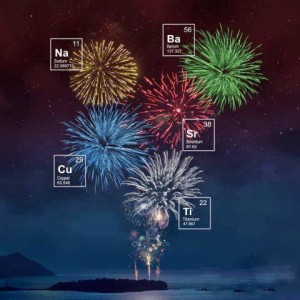 But how does it work?

When a firework is ignited, a lift charge propels it into the sky. What’s a lift charge? Basically just explosive black powder in a confined space, when lit, causes a fast increase of heat and gas that can send a firework as high as 1,000 feet into the air.

Meanwhile, a time-delay fuse burns slowly into the interior of the firework shell. After about 5 seconds, as the shell is soaring overhead, the fuse kindles a charge that reaches the core of the firework, explodes and ignites the stars that contain the metal salts.

The end result?  A beautiful and colorful fireworks display.

However, creating fireworks is a complex process, and even one thing being off — too much black powder, stars that aren’t aligned correctly or a trigger that fires too soon or too late — can cause everything else to go wrong.

TL:DR- The red, orange, yellow, green, blue and purple colors exploding in the night sky during a fireworks display are created by the use of metal salts.

LPD: Three people taken to hospital after crash on 33rd and Cornhusker

BUCKLE UP: A startling crash caught on camera

Florida woman found in Omaha, collapses in the arms of officers, pronounced dead later that day