FREMONT, Neb. (KLKN) – There is a FLOOD WARNING in South Central Dodge and North Central Saunders County in Nebraska as ice jams along the Platte River are causing flooding concerns.

As of 10 am Saturday, the National Weather Service reported an ice jam related to flooding around Fremont and surrounding areas, and locations downstream.

This is video near Ridge Road Drive and Big Island Drive near Fremont.

At 1:30 pm the flood warning area was reduced to areas from Two RiversState Recreation Area to Ashland.
This is video near Ashland this afternoon.

The National Weather Service in Omaha/Valley has extended the Flood Warning until 6 pm for an ice jam in:

NWS Omaha: At 131 PM CST, River gages along the Platte River show the pulse of water has moved south of Valley and will continue to potentially impact areas downstream to Ashland. No flooding has been reported downstream of Fremont. Despite this, interests along the river should remain alert to lowland flooding. 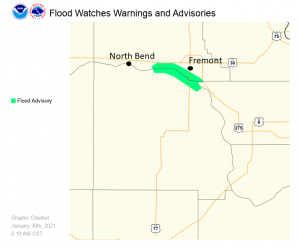 The water is now receding, but officials are asking anyone to use caution around the river. 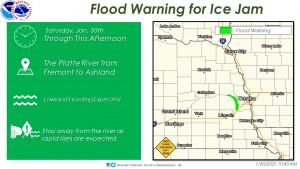