Some Lincoln Northeast students have been protesting outside of the school since Monday due to safety concerns about spiked drinks at last week's homecoming dance.

The girl told police she left the drink unattended for an unknown amount of time. She returned to find the drink discolored and some of it missing.

She told police that she consumed the drink and started to feel ill afterwards. According to LPD, neither school staff or the Lincoln Police officer on duty were informed of drugged drinks at the time of the dance. That investigation is still ongoing.

In the days to follow, students and parents have held small protests across the street of the school.

Audria Stroughter, a student at Northeast, says she has been participating in protests since Monday of this week. She explained her reason for protesting.

“I’ve never felt supported by LPS or felt like I was backed up or safe in school,” she explained. “This is about LPS taking accountability for the things that they do. Stop trying to cover things up, and stop trying to push away our problems and tell us to just ignore it.”

Stroughter says she and her mother were disappointed by an email sent to LPS parents on Friday, that characterized online commentary about spiked drinks at the Northeast homecoming dance as “rumors and misinformation spreading on social media.” 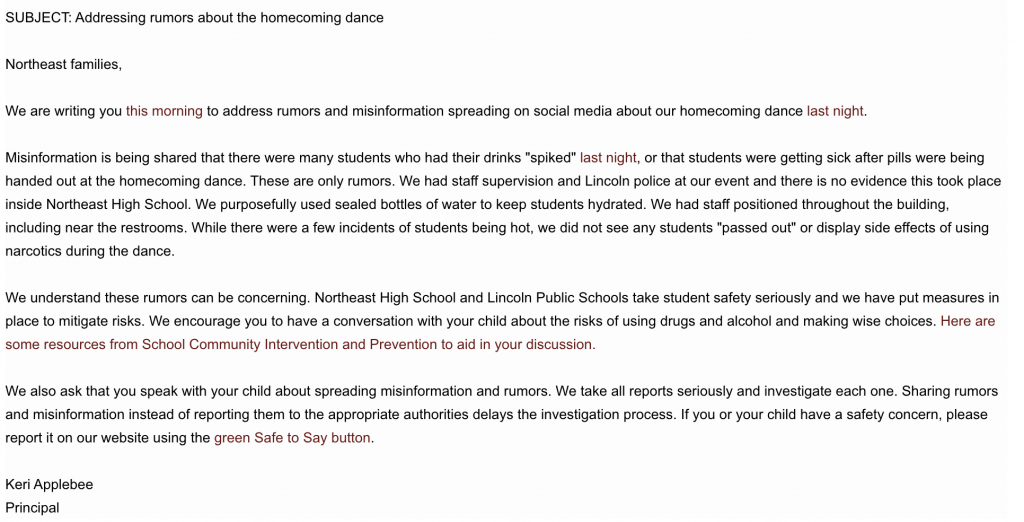 LPS tells Channel 8 that the message to parents was sent before an official police report was made.

Stroughter says she was at the dance and did consume a beverage. She felt strange afterward, but was unsure if she had been drugged.

“I’m not 100% sure,” she said. “But there was a point in time that I had set my drink down and I went dancing, and I came back and I drank it. And then after a while, I felt my stomach felt kind of sick, and I felt overheated. So I went to the bathroom to take a break and I saw that my face was like, red.”

This is not the only issue at Northeast.

In an email to parents, LPS says that there was an altercation between two students and a parent on Wednesday at lunch, outside of the school, although the nature of the dispute is unclear.

According to LPD, the altercation was between a 37-year-old woman and a 17-year-old student at one of the protests. The 37-year-old was cited for misdemeanor assault.

LPS says other issues happening at the school include physical altercations between students, bathroom vandalizations, and threats of violence made on social media. They say Lincoln police and LPS security have been informed and the students will face appropriate consequences.

As mentioned above, there has only been one police report about spiked drinks. Stroughter suggests the reason could be because of a lack of trust between students and administration.

Stroughter says the biggest protest was on Monday, protest crowds have dwindled since then. She encourages other students who may have been affected to come forward so something like this does not happen.

“I understand that you guys maybe don’t want this to affect other dances and stuff like that, but this is bigger than just dances. This is about our safety,” she said.