LINCOLN, Neb. (KLKN) – With the recent homicides in Lincoln, it seems that violence in the city is on the rise.

But the Lincoln Police Department assures residents that the city is a safe place for their families.

Monday’s stabbing was the tenth homicide this year in Lincoln. Last year, there were a total of 8.

Despite the increase in slayings, LPD said the total number of violent crimes is declining.

The department addressed safety concerns during its press meeting Tuesday.

“Violent crimes continue to be down compared to other years,” Chief Teresa Ewins said.

Violent crimes include not only homicides, but also rape, robbery and aggravated assault.

Ewins says the latest homicides are isolated cases and do not signify a danger for the public.

She said investigators look at whether killings are random or whether the victim and perpetrator had an interaction beforehand.

“And I’m going to say, every single case that we’ve brought forward to you is not random,” Ewins said.

LPD’s Crime Analysis Intelligence Unit data shows that as of Sept. 25, violent crimes were down 5% from last year and down 12% from the average of the past five years.

But homicides were up 40% as of Sept. 25, with seven reported. Since that day, the city had three more homicides.

Data for the remainder of September and beginning of October has not been released. 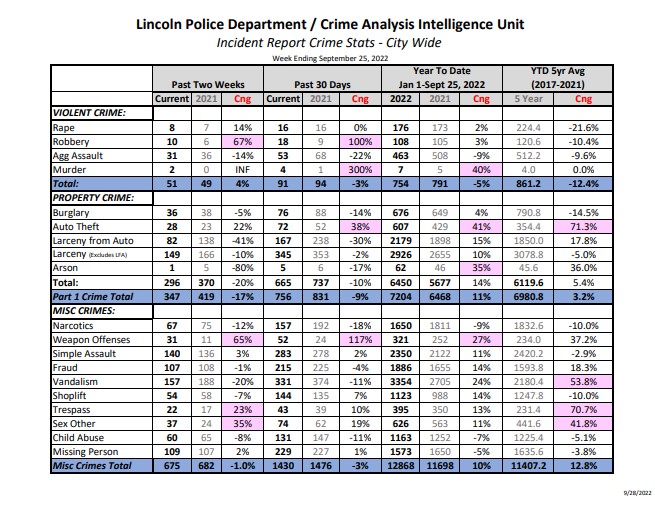 Ewins said officers are doing the best they can. She said law enforcement in Lancaster County works together to prevent crime from happening.

“Lincoln, I feel is a very safe community and we are doing the best that we can,” she said.

Ewins said the department is also working on being more transparent when reporting on violent crimes.