NASA astronauts blast off into space on a SpaceX rocket

After a historic launch from Kennedy Space Center in Florida on Saturday, the astronauts aboard SpaceX’s Crew Dragon spacecraft synched up with the space station Sunday morning.

US astronauts Doug Hurley and Bob Behnken will dock to the International Space Station (ISS) in the next hour.

The men are making their way up to the orbiting platform after their launch on a Falcon-9 rocket from Florida’s Kennedy Space Center on Saturday.

The SpaceX Crew Dragon spacecraft carrying NASA astronauts Robert Behnken and Douglas Hurley on their way to the International Space Station has safely reached orbit, and the nosecone has been opened. At 4:09 p.m. EDT, the Crew Dragon will conduct a phase burn to put it on its trajectory to meet up with the space station Sunday for docking at 10:29 a.m. 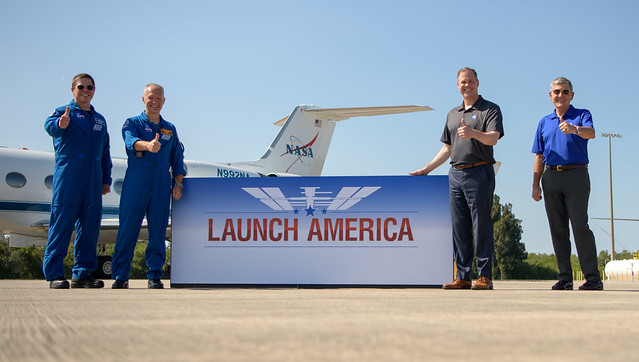 The Crew Dragon mission marks the first time a manned rocket has launched from U.S. soil since the space shuttle program ended in 2011. President Donald Trump was at the space center to view the historic event.

It marks the first time in history that a commercial aerospace company has carried humans into Earth’s orbit.

The launch was originally scheduled for May 27 but was postponed due to bad weather.