UTICA, Neb. (KLKN) –On Friday evening, troopers with the Nebraska State Patrol (NSP) arrested a North Platte woman after a brief pursuit. It happened on I-80 near Utica. In an attempt to avoid arrest, the suspect vehicle struck an NSP cruiser. 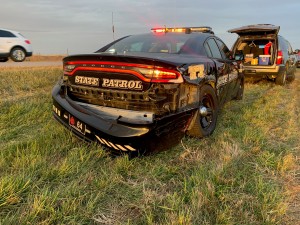 While attempting to perform a traffic stop, the Tahoe drove into a median, stopped but than began driving away. A pursuit followed before the Tahoe stopped once again, troopers positioned their vehicle to block the Tahoe from entering I-80 again by parking in front of the vehicle. The driver of the Tahoe then drove forward and struck the patrol unit before driving away once again. The patrol vehicle was still able to operate so Troopers engaged in another pursuit. Once the car finally came to a stop, Troopers were able to arrest the driver without further incident. The entire pursuit lasted approximately two minutes.

The driver, Debra Pittman, 65, of North Platte, was arrested for willful reckless driving, felony flight to avoid arrest, use of a deadly weapon to commit a felony, hit and run, driving under the influence of alcohol, and numerous traffic violations. Pittman was lodged in Seward County Corrections. Neither trooper was injured in the incident.

Dozens gather for 'Back the Blue' event in Eagle

'It's like watching a dream burn:' Local farmer's harvesting equipment set on fire

What is your legal right as a Nebraskan if someone breaks into your home?