Authorities provided an update on the Westroads mall shooting at 2:15 pm CDT.

UPDATE, 10:38 PM: Omaha Police have released a photo from Westroads Mall and are asking for the public’s help in finding the individuals shown. The people are described as “persons of interest” and the police department is asking people with information about them to call Omaha Crime Stoppers at 402-444-STOP, or online at www.omahacrimestoppers.org or on the P3 Tips mobile app. 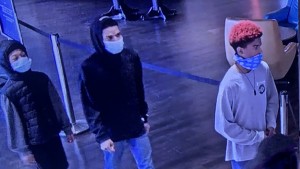 UPDATE 9:41PM: Omaha police have released the names of the victims who were shot at Westroads Mall on Saturday.

Trequez Swift, 21, died from his injuries after being transported in critical condition to Bergan Mercy.

UPDATE: Omaha Police say one person is dead following the shooting Westroads Mall. The man show was transported to Bergan Mercy in critical condition, and is said to have died as a result of his injuries.

Police responded to a shooting at Westroads Mall on Saturday.

Police said they were two victims. A man was brought to Bergan Mercy with life-threatening injuries. Police said he’s in critical condition.

A woman was brought to Emmanuel Hospital with a serious leg injury but it’s not believed to be life-threatening.

The shooting happened just outside of J.C. Penney inside the mall. Police said the call came in around noon.

The suspects are still at large. Police said they have limited details on which direction they took off in.

Police said the situation was not an active shooter situation, but they took precautions and treated it as such.

A search of the mall was conducted for any additional suspects or victims. Police are asking anyone with information to call 444-STOP.

Residents are advised to avoid the area as the investigation is ongoing.

Westroads Mall is closed for the rest of the day on Saturday. Police said it’s expected the mall resumes normal hours on Sunday.

According to Omaha officials, there were two victims and two suspects involved in the Westroads Mall shooting. The victims have been identified as one male and one female. The male was taken to Bergan Mercy hospital for trauma care, while the female was taken to Immanuel hospital with serious, but non-life-threatening injuries.

The victims were shot inside the mall, just outside of JCPenny’s.

Authorities are still looking for the suspects. They are asking anyone in the public who may have information pertaining to the case to reach out to Omaha law enforcement directly or Crime Stoppers at 402-444-STOP.

“This is very uncommon. I believe- and speaking for the department- Omaha is a very safe place. I know incidents like this happen, and unfortunately, nationwide we are seeing an increase in different violent crimes,” said an Omaha Police spokesperson. “However, Omaha is safe. We take a lot of preventative measures as a department. This is uncommon and unfortunately, this is just a coincidence that two incidents have happened so closely together.”

The investigation is ongoing. Westroads Mall will remain closed for the rest of the day as investigators process the scene.

The mall will likely reopen for normal hours tomorrow, but this could change.

Authorities are responding to a shooting at Westroads Mall in Omaha. Officers say it is not an active shooter situation, but the suspect is believed to still be at large.

There is a large police presence at the mall, which is reportedly on lockdown.

Shooting Incident at Westroads Mall. One victim was transported to the hospital with critical injuries. Suspects fled the scene and are at large. OPD is searching the entire mall as a precaution. Please avoid the area. A press release will be sent later with more information.

Omaha Police say one victim was transported to the hospital with critical injuries.

Again, police scanner traffic indicated the shooting may have been targeted and is not necessarily an “active shooter” situation.

Officers are searching the entire mall as a precaution. Please avoid the area.

This is the second shooting to take place at Westroads mall in 2021. In mid-March, an officer was shot after responding to a shoplifting call.

Car thieves crash into Lincoln restaurant after grandma yells at them, police say