Ribbons for Mario: One Lincolnite finds a new way to show support

LINCOLN, Neb. (KLKN) — From donations, both monetary and blood, to letters of support the Lincoln community immediately rallied behind LPD Investigator Mario Herrera who was critically 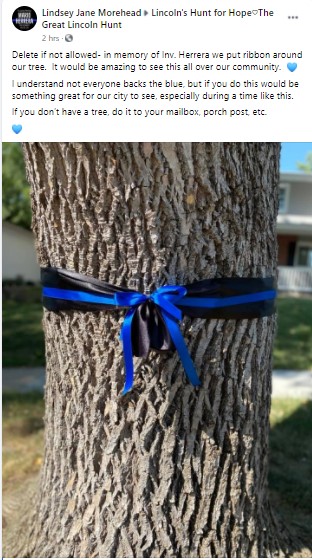 injured on the job. Unfortunately, after a two-week-long battle, Inv. Herrera succumbed to his injuries. But Lincoln continues to find new ways to support the Herrera family.

One example is Linsey Morehead, who posted on ‘Lincoln’s Hunt for Hope, The Great Lincoln Hunt’ Facebook page, asking community members to place a black and/or blue ribbon somewhere in their front yard. She said it would “be something great for our city to see” as a tangible representation of support.