For the past week, Kellogg’s workers and labor unions have teamed up to advocate for a fairer contracts for employees. On Thursday, new allies stepped forward.

LINCOLN, Neb. (KLKN) – For the past week, Kellogg’s workers and labor unions have teamed up to advocate for a fairer contracts for employees.

On Thursday, new allies stepped forward, as 17 state senators, led by Omaha Sen. Mike McDonnell penned a letter to Kellogg’s CEO, expressing their desire to see the company and its employees reach a fair deal for both sides. 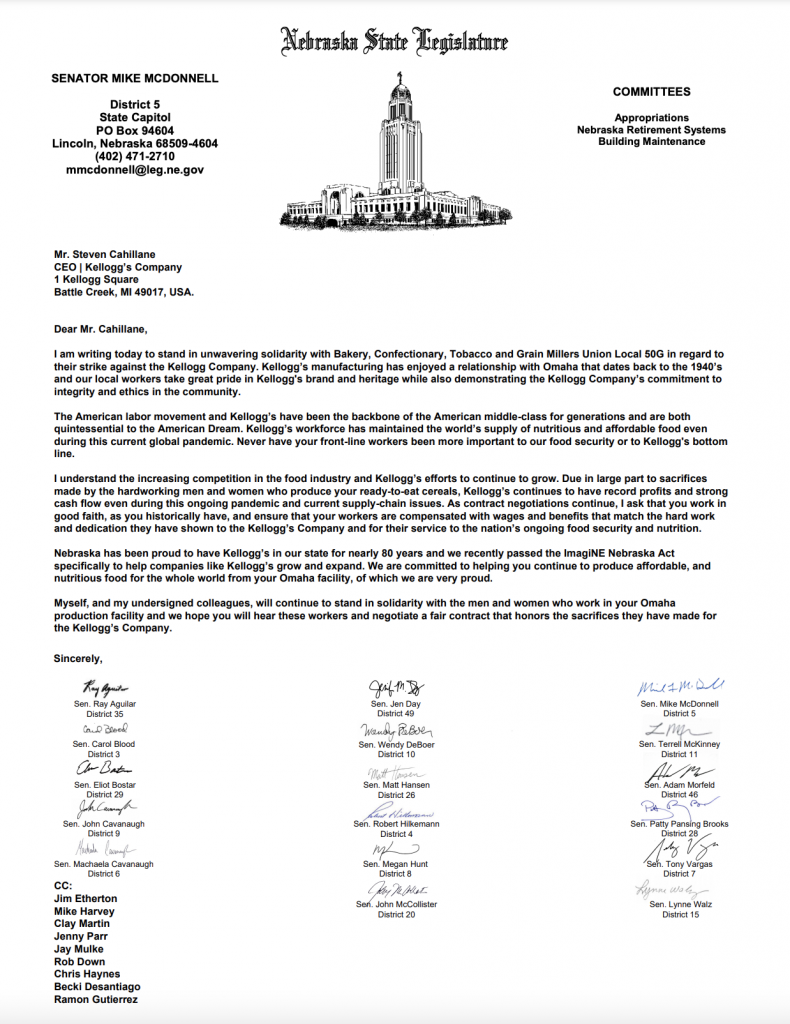 “We believe these men and women are not being treated fairly at this point,” McDonnell told Channel 8. “And Kellogg’s should come to the table, compromise, and get these hard working men and women of Kellogg’s back to work.”

McDonnell explains that one of the reasons workers are on strike is because of a two-tiered system that threatens to impact employee benefits.

“They’re treating people that are entering as new employees of Kellogg’s with different wages and benefits and we just don’t think that is fair, we don’t think that’s productive going forward,” McDonnell said.

Labor union leaders in Omaha have had boots on the ground outside of the Kellogg’s plant for more than a week, some accusing the company of trying to strong-arm workers into accepting a new deal.”

“They’re using the attitude, ‘Our way or the highway,'” said Terry Moore, president emeritus of the Omaha AFL-CIO. “It’s as simple as that. And that’s wrong. That’s negotiating in bad faith.”

McDonnell says he’s hopeful that by reaching out to Kellogg’s, he and his fellow senators can help facilitate a dialogue between the two sides.

In the letter, McDonnell writes:

“I understand the increasing competition in the food industry and Kellogg’s efforts to continue to grow. Due in large part to sacrifices made by the hardworking men and women who produce your ready-to-eat cereals, Kellogg’s continues to have record profits and strong cash flow even during this ongoing pandemic and current supply-chain issues. As contract negotiations continue, I ask that you work in good faith, as you historically have, and ensure that your workers are compensated with wages and benefits that match the hard work and dedication they have shown to the Kellogg’s Company and for their service to the nation’s ongoing food security and nutrition.”

McDonnell says he has not heard from Kellogg’s since writing the letter.

“We want to see a successful agreement, both sides to come back to the table and make sure these men and women of Kellogg’s are being treated fairly, and give them a chance to have a fair contract and get them back to work,” he said. “That’s the goal.”

Channel 8 reached out to Kellogg’s for a statement, but they did not immediately respond to that request.