LINCOLN, Neb. (KLKN) – Much of eastern Nebraska, including Lancaster and surrounding counties, is now in a WINTER STORM WARNING as the warning area has been extended. 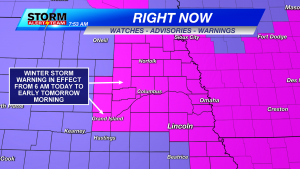 Much of the viewing area already has 2-3 inches of snow by 7 am. More precipitation is expected and could include some sleet or freezing rain.

As the Storm Alert Team has been tracking this storm for the past week, and we’ll update as it keeps moving through the area.