UPDATE: One dead after motorcycle vs pick-up crash in southwest Lincoln

One man has died following a motorcycle crash near 10th and High streets in southwest Lincoln. 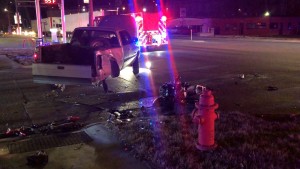 Lincoln Police have confirmed that a 21-year-old Lincoln man has died after his motorcycle collided with a pick-up truck.

It happened Wednesday night around 7 p.m. at 10th and High streets, which is just south of Van Dorn.

“I saw the motorcycle going 80 to 100 miles per hour and that guy was going to turn left. I don’t think he realized how fast that motorcycle was going,” says David Little, an eyewitness to the crash.

Other witnesses at the scene performed CPR until Lincoln Fire and Rescue medical crews arrived.

The motorcyclist was rushed to the hospital with life-threatening injuries, where he later died.  Police have not released his name or any other details. The driver of the pick-up, 27-year-old Samuel Demmers, was not injured, but was cited for DUI.

Police do believe speed was a factor in the crash but are still investigating.