LINCOLN, Neb. (KLKN) – Walmart announced on Thursday that its truck drivers will receive pay increases that will nearly double their average salary.

Walmart’s Nebraska drivers make up 40 of the nearly 12,000 employees who will see pay increases.

With the announced pay increases, first-year drivers can make up to $110,000. Drivers who have been with the company longer can earn even more. 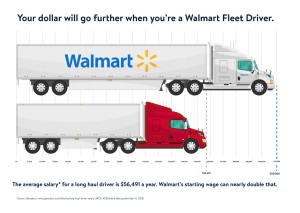 Recently, trucking companies have implemented varying forms of incentives to help fill gaps in the trucker shortage which has been growing since 2017.  Employers in Nebraska are looking to decrease the age requirement for truckers in addition to offering family-friendly driving options.

Walmart also announced the Private Fleet Development Program, which will enable its other employees in select locations to earn their commercial driver’s license for free and become professional Walmart drivers.