A winter storm is taking aim at Nebraska

While the weather becomes more active on Wednesday, we still have one more day of quiet weather. We will be dealing with low clouds initially for much of the area on Tuesday morning.

However, I suspect that the sun may poke out during the afternoon in eastern Nebraska. For areas closer to central and western Nebraska, the low clouds may be a bit more stubborn. 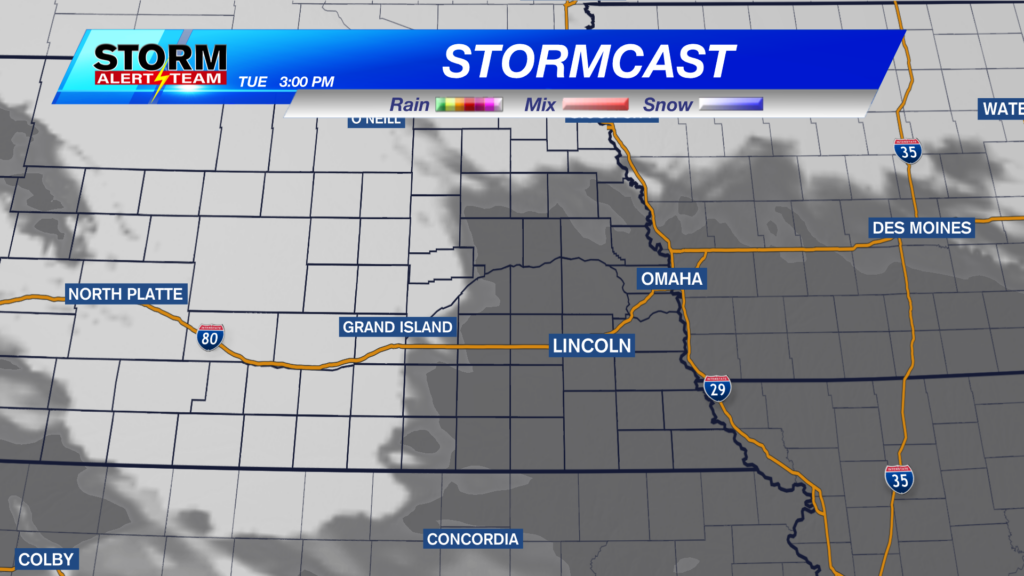 High temperatures will still be above average on Tuesday. We’re forecasting low to mid-40s in Lincoln, with slightly warmer air to the south and cooler air to the north. 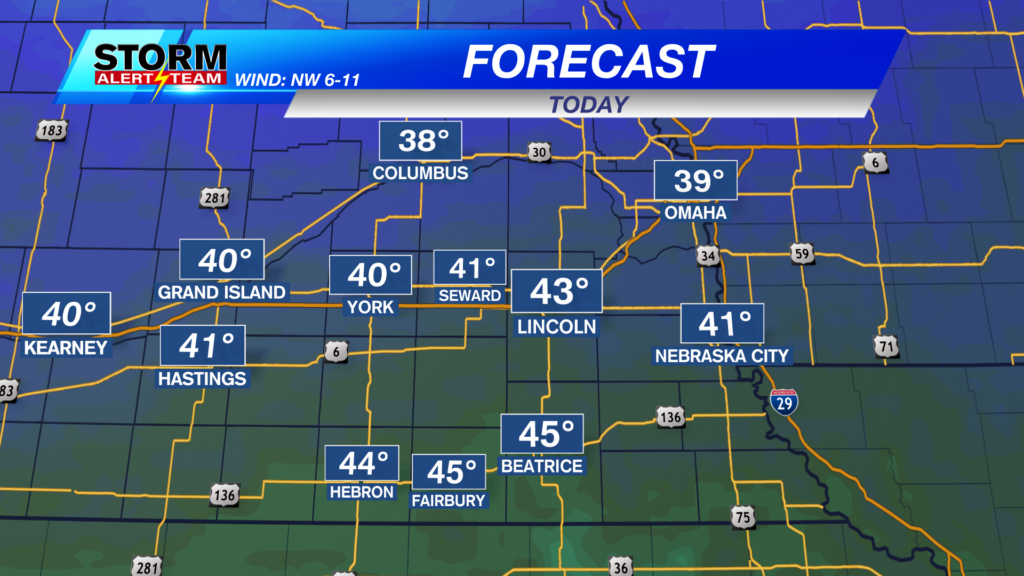 No matter how much sunshine we see during the afternoon, the clouds return on Tuesday night. Meanwhile, precipitation will also be approaching.

Precipitation will move from west to east on Tuesday night, arriving in eastern Nebraska on Wednesday morning. For Lincoln, it will probably arrive just in time for the morning commute – any time after 5-6 a.m. is fair game. Earlier onset times are expected farther west.

Many will see snow throughout the entirety of the event.

However, we are watching the potential for a warm pocket of air just above the ground to introduce a wintry mix for southeast Nebraska. Lincoln will likely find itself very close to the transition region.

A wintry mix and/or snow will remain possible through the day on Wednesday. At some point, a complete transition to snow should occur.

By Wednesday evening, the intensity of any precipitation will be letting up. 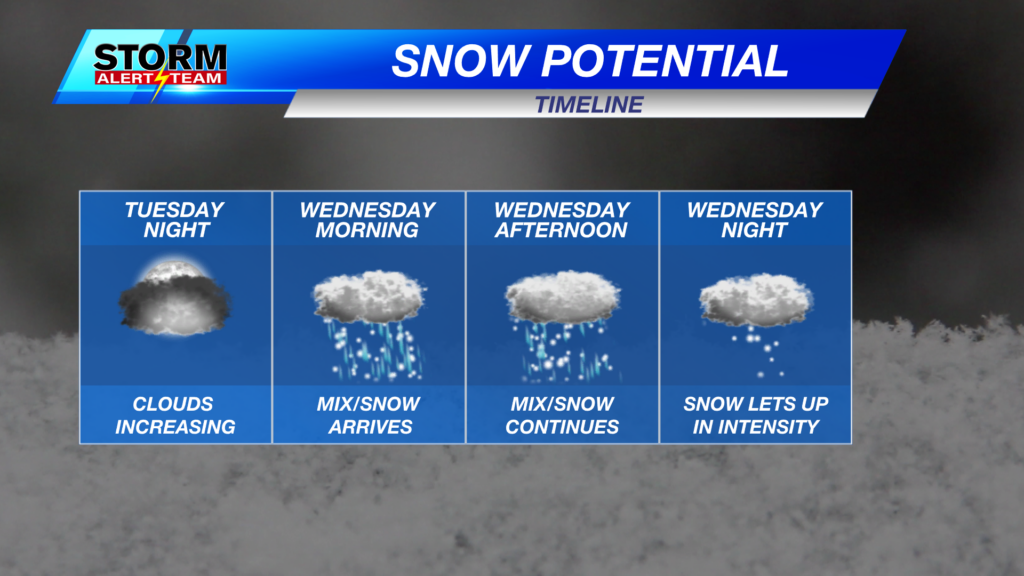 The most snow will be in central and northern Nebraska, making travel difficult to impossible.

Given the chance for a wintry mix in the southeast corner of the state, the snow potential is a lot lower. Freezing rain and sleet will eat away at any snow totals.

Lincoln has a chance to see this wintry mix, so we’re erring on the lower side of things in Lincoln.

We will have to make adjustments to this forecast as we gain a better understanding of how this storm system will track. 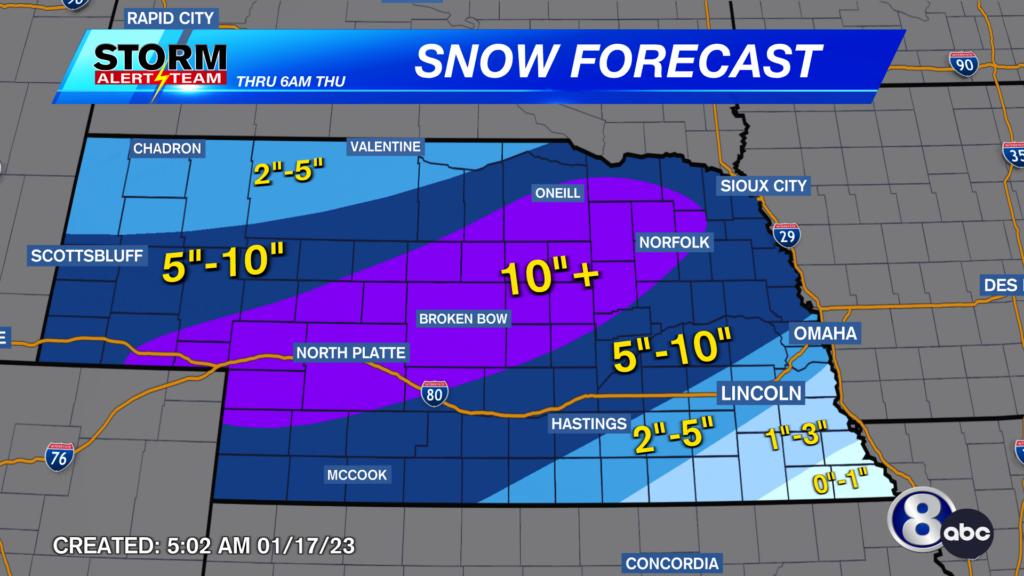 While snow totals will be lower for areas that see a wintry mix, the potential to see ice accumulation is a bit higher.

Some areas of southern Nebraska could see up to a quarter-inch if things track just right. 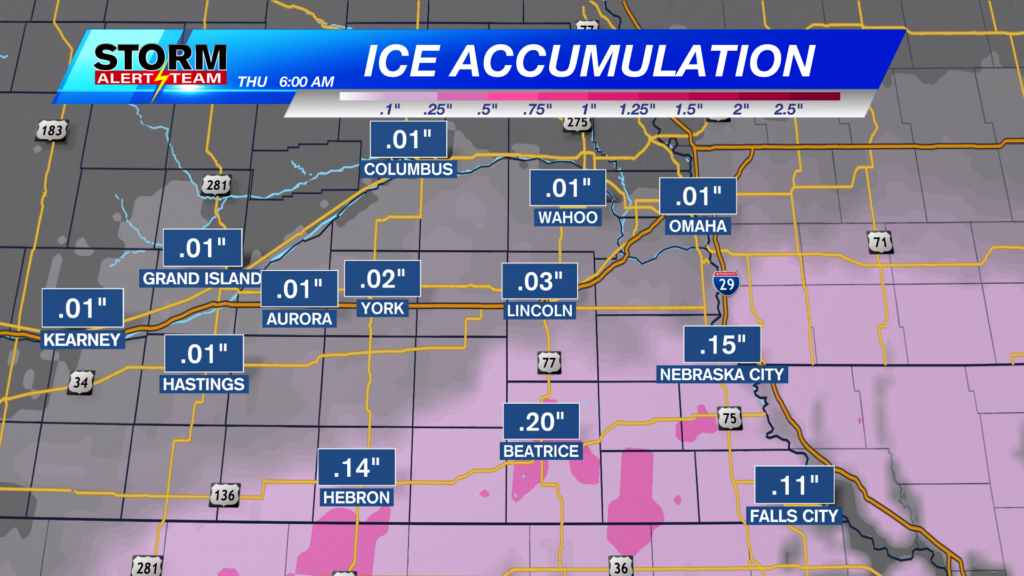 This means that even if you do not see a ton of snow, underlying ice could cause weather weather issues in affected areas.