The 4th of July weekend is upon us and there is quite a bit going on in the weather department. There’s a chance for storms each day, but it won’t be a wash out. See the day by day details below! 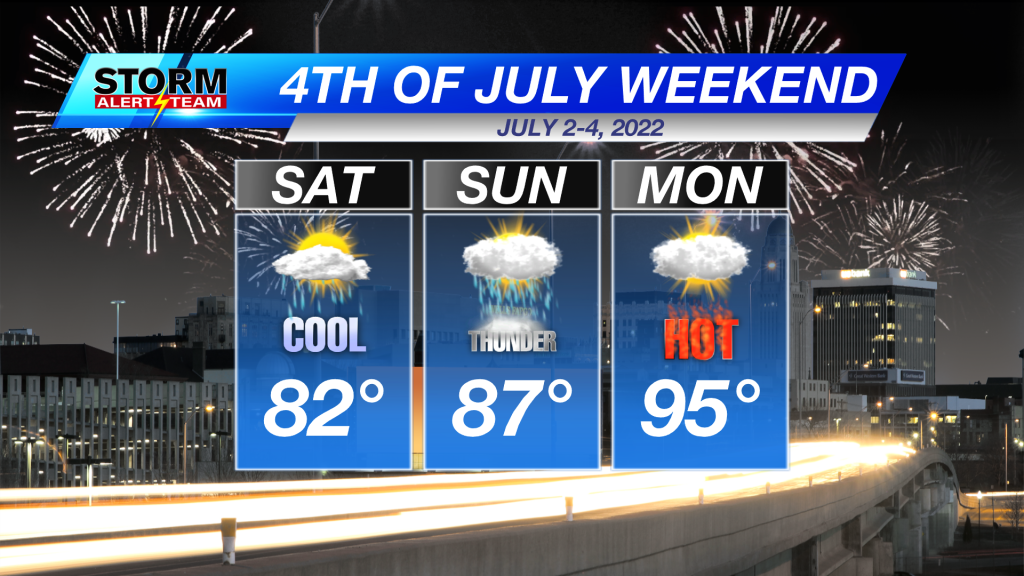 Starting off on Saturday, scattered showers and thunderstorms will be possible early, then a small chance at some isolated storms popping up in the afternoon. After those, we’ll see partly cloudy skies at night. It’ll be a cooler than average day on Saturday with highs only in the lower 80s.

On Sunday, we’ll be partly cloudy to start the day and that will last into the afternoon hours. Storms will try to pop up in the late afternoon and evening hours, some of which could be strong with some hail and damaging wind. After those storms roll through, the rest of Sunday night looks quiet. Highs on Sunday will be in the upper 80s. Sunday night, temperatures will be around 80 degrees by sunset.

On the 4th of July, most of the day looks dry and hot with only a small chance at an isolated storm popping up in the afternoon. Highs in the afternoon will be in the middle 90s and the heat index will get into the 100 to 105 range. Temperatures will drop to around 85 by sunset.

As we get past the holiday weekend, next week looks hot, humid, and unsettled. Storms will be possible each day with highs in the lower and middle 90s and a heat index near 100 degrees.

Taste of October in August