LINCOLN, Neb. (KLKN) – Jeff Henrichs’ passion for baseball started as it does for many of us: as a kid watching his heroes on TV.

“I wanted to be an announcer, you know, I wanted to be the next guy for the Royals,” Henrichs said. “I just had a love for baseball.”

Henrichs, a 1981 Lincoln East graduate, is now in his 38th year as an umpire.

His career started at Joe Brinkman’s Umpire School, where he finished as a top prospect. He went on to spend 10 years as an umpire in the minor leagues.

He eventually made it up to the MLB as an umpire in the American League before starting over as a college umpire.

“Coming out of pro baseball into college baseball, that really didn’t happen too much,” Henrichs said. “But, you know, because we’d work 200 games a year when you take spring training and the regular season and instructionally, so we got a lot more training.”

Henrichs quickly worked his way up to umpiring some of the biggest games in college.

His first regional game was in 1997 at LSU and his first time in a College World Series game was in 2003.

Henrichs is one of only two umpires to umpire in back-to-back series.

“You get this phone call on a Monday at about 10,”’ Henrichs said. “Getting those calls never gets old.”

Only eight are selected each year selected through a complete evaluation, nomination and selection process by the Division I Baseball Committee.

Nerves are there, but remembering that you’re just a fan on the field helps, Henrichs said.

“We always have a little saying that it’s OK to have butterflies; just make sure they fly in formation,” ‘he said. “If you can’t go out on the baseball field and have fun, don’t do it.” 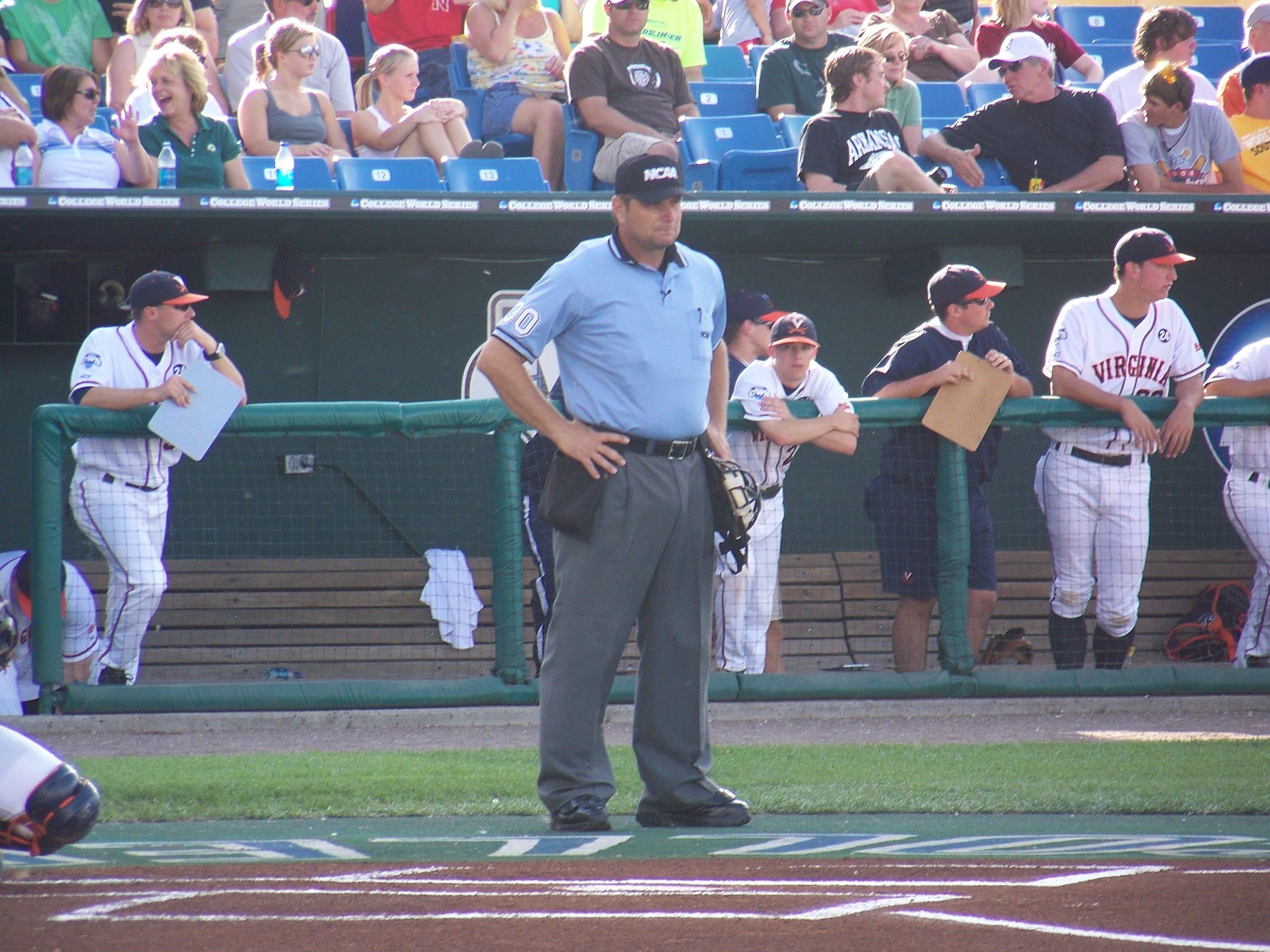 The work of an umpire is labor-intensive, and the preparation for working that many games is intense, Henrichs said.

Henrichs said each umpire has the one thing they like to hydrate with before games.

“Usually, the day before, I do everything from pickle juice to Gatorade to Pedialyte,” he said.

After more than 20 years working in college baseball, Henrichs has seen many incredible games, but one in particular sticks out.

The 2018 CWS Finals between Arkansas and Oregon State. Game 2, the ninth inning.

“I was behind the plate, and you know, Coach Van Horn being from Nebraska here, I was having a pretty good game.”

Arkansas fielders watched as a foul ball dropped between them with two outs left. If the Razorbacks had caught the ball, they would’ve locked up the title.

No one caught it, so Cayden Grenier singled to tie it up, followed by a two-run home run from Trevor Larnach to give the Beavers a 5-3 win and force a third game.

“We got to Game 3, and just the emotions that you feel as a fan and players, we feel the same way,” Henrichs said. “It’s not that you get into the game, but you feel it, and that’ll be one of the ones that I cherish the most.”

As teams measure their success on the field by the way they play, umpires determine it by their accuracy.

“Your career can kind of hedge and depend on your strike zone,” Henrichs said.

“Last year, it was cool. We didn’t have any misplays at the College World Series, nothing was overturned,” he said. “Walking off the field, you know, knowing that you did a good job. There’s always a couple you go back, there’s never a game that I don’t go back. You get off and it’s been fair, and you know, everybody got a fair shake. That’s really cool.”

For Henrichs, his family’s been a constant part of umpiring the CWS, serving as a reminder of all he’s worked for.

Henrichs has a son and daughter-in-law who both work at the University of Nebraska. He has two stepdaughters who live in Denver, and his oldest son lives in Minneapolis, while his youngest son graduated from UC Davis and is living and working in Sacramento.

“Every time I’ve worked a plate, my whole family who, you know, is around here has to come,” he said. “So I got tickets here, there and everywhere. I think the NCAA makes money off me when I work the plate.”

In 2015, Henrichs was preparing to work a Super Regional game ahead of the CWS.

His family began planning their familiar trip to Omaha around the same time his youngest son, Scott, was sick.

“His whole left lung looked like a 30-year smoker,” Henrichs said. “He had two nodules that looked like 1-inch pieces of tar on his lungs. The doctor came in and he said, ‘Well, Scotty, I got good news and bad news. The good news, it’s not cancer. The bad news is we don’t know what it is.’”

Henrichs had to make a decision – either to go to the CWS or stay with his son.

Scott told him he needed to work it: “If you were in the hospital and having surgery, and I had a game on Friday night, would you tell me not to play? You go do it.”

The family still didn’t know exactly what was wrong during the series.

“It was a very, probably the toughest time of my life,” Henrichs said. “To have him there and watching made it all worthwhile.”

They later found out he had a rare autoimmune disease.

Henrichs said being on the field in Omaha was just the distraction he needed at that moment.

“You’re just out there for three, 3 ½ hours just enjoying being on the baseball field, especially in Omaha,” he said. “You walk around, you know, you talk to baseball, college baseball fans, you say Omaha, everybody knows what Omaha means.”

In 38 years of umpiring, Henrichs has developed a new passion for teaching the next generation of umpires.

Henrichs isn’t umpiring in this year’s CWS, but Mark Wagers, someone he mentored and worked with for years, is.

Henrichs said that’s the best part of his job.

“We’re teaching you to take our job, and now it’s coming to fruition,” he said. “They’re kind of starting to weed me out a little bit. Omaha is a dream come true. And hopefully, I can get back one more time, but it’s been a great ride.”