Bryan officials are still working to determine the logistics of such a method.

Bryan Health is looking into the possibility of using UV light to disinfect personal protective equipment so that it can be used more than once.

“We are actively looking at a process where we could reuse N95 respirators for the same healthcare worker,” Kresbach said.

Similar to a method currently being used by Nebraska Medicine, the gear would be taken to a central location and exposed to UV light which disinfects it.

Bryan officials are still working to determine the logistics of such a method, adding that they are working with a epidemiologist Tuesday afternoon to see whether it is something that can be implemented.

Since implementing a similar method on March 19, Nebraska Medicine has successfully decontaminated approximately 5,000 face masks – about 500 per day, a spokesman told Channel 8 Eyewitness News on Monday. 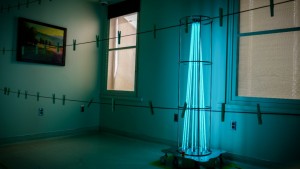 Kresbach said they don’t know how many masks they could use the method on, or how many times a mask could be used after the treatment.

Bob Ravenscroft, vice president of advancement at Bryan Health, said their supply of PPE is currently considered “limited.” He said donations from the community have helped.

Bryan officials are expected to provide an update Wednesday morning.