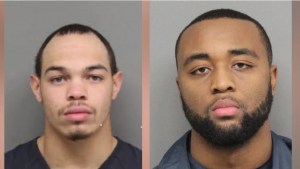 Katerian Legrone and Andre Hunt are scheduled for their preliminary hearings on Wednesday morning.

The two former Husker football players were both charged with first degree sexual assault on January 9th after being arrested in December.

The charges stem from an event in August, when a 19-year-old woman alleged the two men attacked her at an off-campus apartment complex.

A probable cause affidavit obtained by Channel 8 News shows the two men gave contradictory statements the day after the alleged assault. It also found searches on Legrone’s cell phone regarding lying on statements of sexual assault and how saliva is detected in such cases.

Legrone and Hunt consented to DNA testing, where officials determined both men “cannot be excluded as possible contributors.”

Despite the charges formally given on January 9th, attorneys for both men claim their clients are innocent.

If the cases continues to district court after Wednesday’s hearings, both attorneys say their clients will plead not guilty. First degree sexual assault carries a maximum sentence of 50 years.

This is a developing story, we will have more information as it becomes available.