Officer Joshua Atkinson was shot during a call in 2018. On Monday, he was back in full uniform for the first time in over a year.

On December 28th, 2018, Lincoln Police Officers Joshua Atkinson and Kyle Russell responded to a domestic disturbance call, where they learned that suspect was armed with a knife. 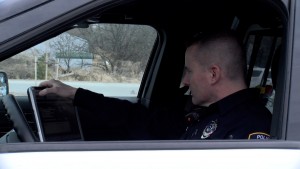 Ofc. Atkinson sits in his police cruiser on his first day back to patrolling the streets since December 2018.

“The knife was presented, while fending off that attack, Officer Russell was stabbed during that process and he tried to end the fight by firing, discharging his firearm, and unfortunately during that incident I was the lucky recipient of one of his rounds,” says Officer Atkinson during an exclusive interview with Channel 8 Eyewitness News on Monday.

But four surgeries, months of rehab and more than a year later, Atkinson is finally back in full uniform and back to patrolling the streets. 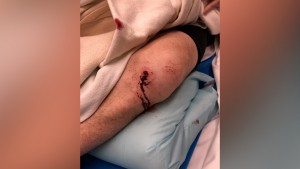 The bullet hit Ofc. Atkinson in his left knee, shattering part of his femur.

“It’s surreal, I mean there was a time they weren’t sure I was going to make it back so the fact that I’m actually wearing my uniform and out driving a police car and responding to calls its kinda…it’s a great feeling,” Atkinson says.

His 12 years of experience and training, plus a little bit of adrenaline, it was Atkinson says helped him remain calm during the situation, even after being shot.

“It was hard to manage not being able to physically do what I wanted to do when I knew what needed to be done but couldn’t do it but the other officers on scene did a great job of making sure everything was taken care of.”

Although it was a fellow officer that shot him, he says Officer Russell did everything right in the situation, and his relationship with him has only grown stronger.

Atkinson says the outpouring of support from his family, friends, the department and the City of Lincoln was another major aspect of his recovery. And even after the frightening event, he wasn’t going to give up his dream job.

“To be honest with you, this is the only thing I’ve ever wanted to do. . . I couldn’t think of another job I would do so it wasn’t an option for me just to decide not to come back.”

Officer Atkinson is back to patrolling the streets for four hours. However, by the end of the month he says he should be back to full-time patrolling on his overnight shift with the Southeast team.