The NCAA voted Monday afternoon to grant seniors participating in spring sports, who didn't get a chance to finish their championship seasons, an extra year of eligibility.

The Division I Council on Monday voted to allow schools to provide spring-sport student-athletes an additional season of competition and an extension of their period of eligibility.

Members also adjusted financial aid rules to allow teams to carry more members on scholarship to account for incoming recruits and student-athletes who had been in their last year of eligibility who decide to stay. In a nod to the financial uncertainty faced by higher education, the Council vote also provided schools with the flexibility to give students the opportunity to return for 2020-21 without requiring that athletics aid be provided at the same level awarded for 2019-20. This flexibility applies only to student-athletes who would have exhausted eligibility in 2019-20.

Schools also will have the ability to use the NCAA’s Student Assistance Fund to pay for scholarships for students who take advantage of the additional eligibility flexibility in 2020-21.

The Council also will allow schools to self-apply a one-year extension of eligibility for spring-sport student-athletes, effectively extending each student’s five-year “clock” by a year. This decision was especially important for student-athletes who had reached the end of their five-year clock in 2020 and saw their seasons end abruptly.

“The Council’s decision gives individual schools the flexibility to make decisions at a campus level,” said Council chair M. Grace Calhoun, athletics director at Penn. “The Board of Governors encouraged conferences and schools to take action in the best interest of student-athletes and their communities, and now schools have the opportunity to do that.”

Winter sports were not included in the decision. Council members declined to extend eligibility for student-athletes in sports where all or much of their regular seasons were completed.

The Council also increased the roster limit in baseball for student-athletes impacted by the COVID-19 pandemic, the only spring sport with such a limit.

"We got our voice heard by them, and that's really all we can do at the end of the day."@HuskerSAAC president Daniel Pearson on the decision by the NCAA.
He was involved in the drafting of the joint statement sent out earlier today. More tonight on @Channel8ABC! #Huskers pic.twitter.com/HlDqigyJSJ

This decision comes after the SAAC (Student-Athlete Advisory Commitee) of all the Power 5 conference universities, including Nebraska, posted a joint statement asking for the following items. 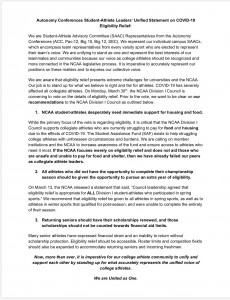 SAAC joint statement regarding the NCAA’s decision to grant an extra year of eligibility to student-athletes.

Here is a list of the school’s who signed this statement: 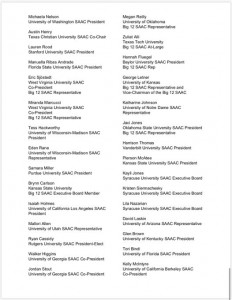 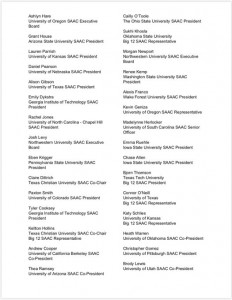