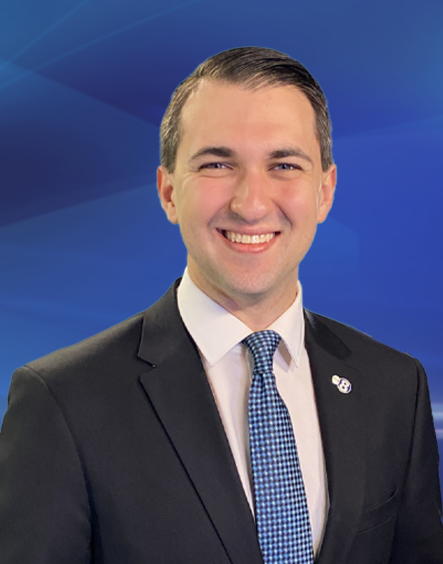 Andrew grew up in Robins, Iowa. Some of his fondest childhood memories are going to the family lake home, visiting his grandparents’ farm, pick-up football games with his cousins, and playing competitive basketball and baseball.

The thought of being on television was intriguing to him, and when he realized that he wasn’t going to be a star athlete, a famous musician, or an entertainer, he figured that broadcast was the next best thing. Andrew graduated from the University of Nebraska-Lincoln.

He began his television career as the morning reporter for Channel 8 Eyewitness News.  Before that, he interned at KCRG-TV in Cedar Rapids, the Orlando Sentinel, and the Omaha World-Herald.  In 2014, he became a reporter for Channel 8 News Sports.  He then moved on to become the weekend sports anchor at KWQC-TV, Davenport, Iowa.

In 2018, Andrew came back to Lincoln where he was named the Sports Director for Channel 8 Eyewitness News.

In his spare time, he likes to go on walks and play cards with his wife; watch Netflix, and play golf.

Biden and Congress mark a year since violent insurrection

Preview: Huskers set for Final Four match against No. 3 Pittsburgh

WATCH: Nebraska Medicine gives inside look of its COVID-19 ICU

Dave Heineman will not run for Nebraska governor

City of Lincoln to remember Pearl Harbor during virtual ceremony

Mental health symptoms rise during holiday season for some

UNL students may still have to attend class on snow days