In the release, new Chairman Eric Underwood and his team set the tone for the party’s future as the 2022 midterm elections approach.

Under the new management, the party said it will continue to support Republican candidates nominated in May’s primary election.

Referencing the convention, the state GOP said the change in leadership was not “for or against any specific people or group,” but a move to unify conservative voices across the state.

Going forward, the party said it will use a “bottom-up” approach that will prioritize the will of the party’s members across Nebraska.

During an interview on KFOR on Monday, Gov. Pete Ricketts said he accepted the party’s decision and looks forward to what the new leadership will accomplish.

The full press release from NEGOP can be read below. 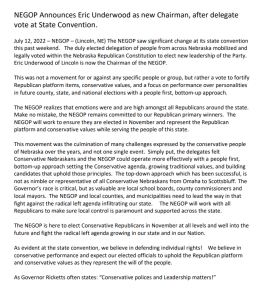